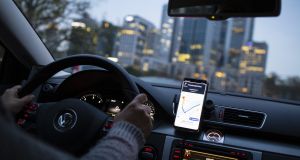 Uber will seek a valuation of up to $91.5 billion (€82.1 billion) in its upcoming flotation, lower than its bankers had previously hoped for but still putting it on track to become Silicon Valley’s biggest initial public offering since Facebook.

The ride-hailing group is pitching shares to investors at an initial range of $44 to $50 each in one of Wall Street’s most widely anticipated in years, as a herd of highly valued technology companies, including Zoom, Slack and Pinterest, rush to the public markets.

At the top end of the range revealed on Friday, Uber itself would raise as much as $9bn from the IPO, while existing investors including SoftBank, Benchmark and co-founders Travis Kalanick and Garett Camp will also sell up to $1.4bn worth of stock.

The initial valuation, revealed in an updated filing and ranging between $80.5 billion and $91.5 billion on a fully diluted basis, is higher than its most recent private funding round but below a price range suggested to some investors just last month.

Uber’s conservative pricing could rise following meetings with investors as it approaches next month’s listing, but it follows an underwhelming stock market debut by rival Lyft, which is trading more than 20 per cent below its issue price.

In addition to its public listing, Uber is also selling about $500 million worth of stock to PayPal in a private placement at the IPO price, it said in Friday’s filings.

PayPal processes payments for Uber in the US and several other countries. As part of the investment, the companies are expected to announce an expanded global commercial agreement and their intention to explore future collaborations including the development of Uber’s digital wallet, according to the filing.

Morgan Stanley and Goldman Sachs are lead underwriters for the IPO. Uber is expected to begin trading on the New York Stock Exchange under the symbol “UBER” in early May.

Friday’s initial pricing marks the start of a marketing blitz by company executives and their bankers. The final terms may change based on investor interest during the roadshow.

Last month, Uber told some investors that it could price its shares in a range of $48 to $55, valuing the company between $90 billion and $100 billion. Uber has been seen as taking a conservative approach to its pricing, given the large size of its deal, coupled with investor concern about the ride-hailing business after the heavy losses reported by the company and its smaller US rival Lyft.

At the proposed range, Uber would still rank as the second-largest IPO by a US tech company after Facebook, which raised $16 billion in 2012, according to Dealogic.

Uber’s IPO documents have revealed a company spending heavily to maintain market share as growth slows. Revenue rose 42 per cent to $11.3 billion last year, while operating losses narrowed from $4.08 billion to $3.03 billion, excluding gains from the sale of businesses in Russia and south-east Asia. The company burnt $2.1 billion in cash in 2018, down from $4.5 billion in 2016.

However, the pace of ride-hailing revenue growth has slowed in recent months due to competitive pressures to subsidise fares and reward drivers. That, along with increased spending to bulk up new ventures such as the Uber Eats food delivery service, its Freight trucking arm, and electric bike and scooter rentals has driven a resurgence in adjusted losses.

Lyft shares have stalled below their offer price, fuelling questions about the future dynamics around ride-hailing. After pricing at $72 in late March, Lyft shares closed at $56.34 on Thursday, down 2.6 per cent for the day.

Uber was valued at $48.77 a share, for a valuation of $76bn, in a private fundraising in August and has raised more than $24bn in equity and debt from private investors since its founding in 2009, according to Crunchbase.

Chief executive Dara Khosrowshahi and four other top executives stand to benefit from the IPO through options comprising of nearly 4m shares, as an incentive for sorting out Uber and moving it quickly to an IPO after Mr Khosrowshahi joined the company in the middle of 2017.

However, the stock benefits only pay out if Uber’s stock market value stays about $120bn for a period of at least three months. The top management team has until 2023 to hit its performance target. – Copyright The Financial Times Limited 2019