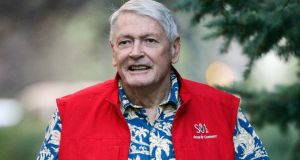 Vodafone, one of the world’s largest mobile operators, is close to buying large parts of John Malone’s European cable group Liberty Global in a deal worth about €18 billion that will expand the UK company’s footprint across the continent.

The deal will see Mr Malone, the US billionaire who controls Liberty Global through voting rights, part ways with the company’s German and eastern European assets, according to sources.

It covers Liberty Global’s operations in four European countries – Germany, Hungary, Romania and Czech Republic – and does not affect the ownership of Liberty’s UK and Ireland subsidiary Virgin Media.

Barring any last minute glitches, a deal could be announced as soon as Wednesday morning.

By expanding in continental Europe, Vodafone will be better positioned to take on Deutsche Telekom, the region’s dominant operator with its T-Mobile brand. It also marks the latest attempt to consolidate the fragmented European sector, where operators have been struggling to offset the low-growth environment and the decline of lucrative sources of revenue, such as data roaming and text messages.

European telecoms companies have been forced to spend billions of euro to upgrade networks to full fibre and 5G networks, which has driven the need for greater scale. Investors have also pushed companies to be more aggressive in pursuing takeovers despite huge regulatory risk in Europe and globally.

Deutsche Telekom’s T-Mobile US last week agreed a takeover of close rival Sprint, owned by Japan’s SoftBank, while dominant US telecoms and cable operators AT&T and Comcast are pursuing huge acquisitions to add content to their platforms and expand their distribution.

A sale by Mr Malone, who earned the moniker “cable cowboy” for his buccaneering role in consolidating the industry globally, marks a retreat from Europe for Liberty Global, which has become increasingly frustrated with the fragmentation of the continent’s telecoms market.

Virgin Media, which is owned by Liberty Global in the UK, is not part of the deal, said those briefed about the negotiations. Vittorio Colao, Vodafone’s chief executive, said in February the door was open to a UK deal in the future but that the German transaction was a “priority”.

The sale of the German and eastern European networks owned by Liberty Global to Vodafone comes in lieu of a wider merger of the two companies that would have encompassed other markets including the UK, Belgium, Poland and Switzerland. The two companies have overlapping assets in German, Romanian, Hungarian and Czech markets.

The German deal will face fierce opposition from Deutsche Telekom and German broadcasters. Although Vodafone’s existing cable business does not overlap with Unitymedia, the combined companies would have enhanced heft in the German market. The deal is likely to be subject to a gruelling regulatory review that could yet derail Vodafone’s plan.

Liberty Global agreed to sell its Austrian business to Deutsche Telekom for €1.9 billion in December and is also considering the sale of its Swiss unit.

The two companies failed to swap assets in 2015 although they managed to merge in the Netherlands to create an integrated fixed-mobile telecoms player.

Shares in Vodafone, which has a market value of £56 billion, closed 1.4 per cent down at 207.5p. Liberty Global was 3.6 per cent lower at $31.74 in early afternoon New York trading, valuing the business at $25.7billion. - Copyright The Financial Times Limited 2018