Among the nine-member group is Ian Power, the chief executive of not-for-profit company Community Creations 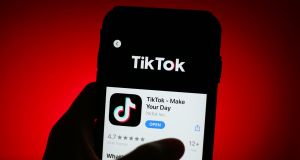 The TikTok app is displayed in the app store on a smartphone. Photograph: Hollie Adams/Bloomberg

Social media platform TikTok has taken another step to safeguard users with the launch of its European Safety Advisory Council, which will advise on its content moderation policies and practices.

The initiative, which will also help TikTok form new policies on emerging areas as they arise, brings together experts from a number of areas, including academia, not-for-profit organisations, charities and NGOs.

Julie de Bailliencourt, Head of Product Policy EMEA at TikTok, said the establishment of the council was a goal of the company since she joined in April last year. “The goal is to have an open, candid coversation with them to understand what we can do better.”

Among the nine-member group is Ian Power, the chief executive of not-for-profit company Community Creations, which is behind youth well-being information site SpunOut.ie and text service 50808.

“The range of challenges young people face online continues to evolve, and we are learning more and more about their experiences and best practices in online safety every day,” Mr Power said. “ TikTok has taken a proactive approach in making their platform a safer place for creators and users, and I’m looking forward to working with colleagues on the European Safety Advisory Council to support TikTok to continue this important work.”

The European council joins the safety advisory council already established in the US, and the Asia Pacific council that was set up late last year.

“Our plan is to have these regionalised across the world, and Europe is the next step,” Ms de Bailliencourt said. “We are looking for people who can be direct. There is no point having people telling us how amazing we are; we’re not going to progress by people being polite. These experts have the breadth and depth of expertise across a broad range of topics from domestic violence and gender based violence, harassment, bullying, child sexual exploitation, mental wellbeing and suicide prevention. Each of them bring a lot of expertise on these topics.”

The other members of the council include deputy chief executive of the UK-non-profit The Diana Award, Alex Holmes; Professor of Forensic Clinical Psychology in the School of Health in Social Science at the University of Edinburgh and Director of COPINE, Ethel Quayle; chief executive of German deradicalisation organisation Violence Prevention Network, Judy Korn; Justine Atlan, the head of French NGO e-Enfance; manager at the Dutch non-profit Blijf Groep, Kristine Evertz; Robin Sclafani, director at CEJI, A Jewish Contribution to an Inclusive Europe; Satu Raappana, director of Mental Collective, MIELI Mental Health Finland; and Seyi Akiwowo, founder of charity Glitch.

The council has already had its inaugural meeting, with at least four more planned for the coming year. For now the meetings will be conducted over Zoom.