A solution to chemo hair loss and other Irish innovations 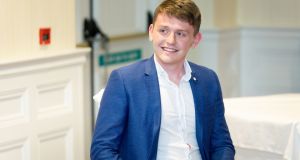 Covid may have ramped up the challenges of getting a new business going, but it hasn’t dampened the drive of five young entrepreneurs who have pushed ahead with ventures in medtech, agtech and consumer products.

Aaron Hannon (22) is no stranger to the start-up world, having launched his first company when he was 17 and his second two years later. Hannon’s initial idea was Enable Arm, a headset device aimed at helping those with limited hand movement to shave independently. His second, and the one that looks set to go the distance to full -scale international commercialisation, is called Luminate Medical, which has developed a medical device designed to prevent hair loss during chemotherapy.

At the end of 2020 Hannon became one of two Irish recipients of a Thiel Fellowship, which supports young people to bring their potentially world-changing ideas to fruition. Fellows are chosen from an international pool and receive a stipend of $100,000 to skip or drop out of college to fast-track their idea. The programme is the brainchild of billionaire entrepreneur Peter Thiel, co-founder of PayPal and Palantir Technologies, and Hannon was selected for his work on the Lily hair loss prevention device.

“Hair loss is one of the most traumatic aspects of cancer treatment, and scalp cooling is currently the main treatment method, but it’s incredibly painful,” Hannon says. “There are also capacity constraints and increased risk of infection, as cold caps are communal and non-machine washable. Our device, which prevents the chemotherapy from being delivered to the hair follicle, is individual and portable, meaning patients can use it at home without clinical intervention. The cap can fit into a normal beanie hat or scarf and is pain free, faster-acting and more comfortable than the existing solution.”

Hannon was working at the Translational Medical Devices Lab at NUI Galway when he came across the unmet clinical need for a better answer to chemo-induced hair loss. Having spoken with a cancer focus group about the distress and isolation it causes, he teamed up with colleague Dr Bárbara Oliveira to co-found Luminate Medical. As their solution grew legs, they felt it had sufficient potential to apply for commercialisation funding from Enterprise Ireland. Roughly €600,000 has been spent on the development of the device so far, and the company’s next milestone is a €2.5 million seed round to complete its first human clinical evaluation, with a view to market launch in 2024.

Personal “pain” is often the driver of innovation, and for engineering student brothers James (20) and Charlie (19) Drumm, the pain point that drove them to create the automated grazing system Freshgraze was being late for football.

As youngsters growing up on a dairy farm, it was their job to manually move the fence on the grazing pasture. However, having been regularly rained on and late for training once too often, the pair came up with the idea for their cloud-controlled Grazebot technology, which ensures animals have access to fresh grass throughout the day.

At the heart of the system are two robots that move the fence at a slow, programmable speed up to 400 times a day using the high-tensile wire already in place on most farms. “Freshgraze allocates grass in small portions, thereby ensuring the animals are optimally fed and the land is being efficiently utilised. An entire portion of pasture is consumed before the fence moves, and this results in a healthier animal, increased production, reduced labour and more sustainable land management,” says James.

Remote access to the system allows the feed allocation to be increased or decreased, and the Freshgraze software instantly calculates the effect any change has on the overall rotation length, thereby optimising grassland management. The brothers began working on their idea in 2016, and their development costs, which are now tipping €200,000, have been primarily met with family backing.

“Freshgraze enables natural farm management practices that would be very difficult to implement otherwise,” says Charlie. “It also allows for remote farming, as the feeding regime can be changed from a smartphone or tablet and the data collected used to calculate the optimal performance indexes for each user. Grazed grass is the cheapest and most natural feed available on livestock farms. Increasing the proportion of grazed grass increases farmer profitability by up to €261 per hectare.”

The brothers are running trials with winter forage crops and will begin spring trials with grasslands shortly, with a view to soft launching Freshgraze in September. They are also about to start fundraising to secure about €300,000 to bring the product to market. “The beauty of our system is that it can be easily retrofitted, as most dairy farms already have the necessary infrastructure. As our system is unique, there will be a period of farmer education as people get used to it, but it gives farmers detailed information like they’ve never had before on an easy-to-use dashboard,” says James.

Ralph Fenelon (22) and Marcus Jankola (19) are the founders of eco-friendly Next Life pet urns. They set up their business in September last year, and their 100 per cent biodegradable product is made from natural reed pulp sourced from sustainable farms.

The urns come in two parts. A compartment for the pet’s ashes and a compost and seed compartment. The idea is to sink the urn into the ground and to plant a seed on top that will eventually grow into a permanent memorial.

Fenelon was inspired to start Next Life by personal tragedy. His mother died with cancer and was laid to rest in the traditional way. “As soon as I touched her cold headstone, I knew there had to be an alternative that would help me feel more connected to her,” he says.

“Originally, she wanted to be cremated. However, she changed her mind at the thought of ‘sitting in a box’. If there had been a viable alternative, such as being placed back in the earth as a tree in our garden, she would have chosen that. At the moment, our urns are aimed at comforting those who have lost a beloved pet. However, our goal is to provide humans with a greener and more personal alternative to traditional cremation and burial methods.”

The founders tried unsuccessfully to have the urns made in Ireland or the EU but a minimum order requirement of 25,000 pieces was outside their €10,000 start-up budget so the first consignment is being made in China. In the meantime the founders are developing their initial customer base of online sales, pet crematoriums and veterinary practices in Ireland and the UK.