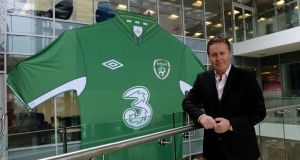 Robert Finnegan, head of Three Ireland: “Our Ebitda percentage at the moment is about 32 per cent and growing. We have one of the highest Ebitda percentages in the market in that respect.” Photograph: David Sleator

Three Ireland plans to spend €100 million a year on the rollout of its 5G network as it prepares to go live with the new technology over the next 12 to 24 months, chief executive Robert Finnegan has said.

In an exclusive interview with Inside Business, a podcast from The Irish Times, Mr Finnegan said 5G could “provide access to really, really fast broadband in rural areas where people want it”.

“2G was about voice and text, 3G was about access to the internet but maybe not as fast as people wanted, while 4G was about very good speeds,” he said. “5G will take that even further and it’s almost like real time. You could get up to 100 times what you experience on 4G potentially.

“Handsets won’t be ready for another 18 to 24 months. [In the meantime] we’ll look at fixed wireless access, an alternative to broadband on a fibre link. We’ll see that happening at the end of this year or the beginning of next year.”

Mr Finnegan said data usage on its network was increasing by about 50 per cent a year.

Three is Ireland’s second-biggest mobile phone operator with a 35 per cent market share. It acquired 5G spectrum from the State last year for €15 million.

Three’s Hong Kong parent company, CK Hutchinson Holdings, has so far invested €1.8 billion to date in Ireland. Roughly half of this was used to build up the business organically to 2014 when it acquired rival O2.

However, the company has struggled to make a profit. Latest accounts for Three show it had accumulated losses here of €860 million at the end of 2016.

“Hutch are very pleased with their investment. Our Ebitda percentage at the moment is about 32 per cent and growing. We have one of the highest Ebitda percentages in the market in that respect,” Mr Finnegan said.

He added that the company was “profitable at the moment and we expect it to be profitable going forward”.

1 Bank leaked my loan request to family who tried to rip me off
2 Ryanair and Aer Lingus monitor impact of coronavirus on travel to Italy
3 Over $12m from sale of Walford handed over in Sean Dunne bankruptcy case
4 EU and British positions harden ahead of Brexit talks
5 How can I view my dead brother’s will if I’m not the executor?
Real news has value SUBSCRIBE