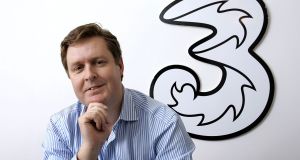 As recently as August, Three’s chief executive, Robert Finnegan, was promising a limited 5G rollout before the end of this year.

Mobile operator Three Ireland has confirmed that it is delaying the launch of high-speed 5G services – originally scheduled for this year – until 2020.

As recently as August, Three’s chief executive, Robert Finnegan, was promising a limited 5G rollout before the end of this year. In 2018, it signalled it would launch in the first three months of 2019, although this never materialised.

Three now says it will have a “substantial” launch of 5G in 2020. Rival operator have already launched 5G in parts of Ireland, although the value of this for their customers is debatable as 5G handsets are not yet widely available.

“We are continuing to work through our 5G rollout plan, with trials well underway,” said Three.

“Rather than launch with a small number of sites this year, as other operators have done, we will launch with a substantial footprint in 2020. As a lot of the technology that will exploit the benefits of 5G, including 5G-enabled smartphones, are currently limited in availability, there is no demand that requires an immediate launch.”

The company has so far declined to reveal its 5G network partner, but it is believed to be in discussions with Chinese group Huawei.