CES 2017: look to the future at the biggest tech show in town 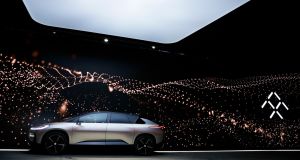 Levitating speakers, self-driving cars, smart TV and the next generation of mobile technology will all be on display as the biggest tech show in town opens its doors in Las Vegas.

With a 50-year history, CES (Consumer Electronics Show)has been the launchpad for some of the most innovative products that have hit the market, from the VCR to camcorders, from the Commodore 64 to the original Xbox.

And it doesn’t look like it’s willing to give up its place in the hierarchy of consumer tech events. CES officially opens its doors on Thursday but with a couple of press days already under its belt, the show has already begun. So what can we expect from this year’s event?

TVs are a staple of CES. In previous years, we’ve seen the advent – and quiet demise – of the 3D TV, followed by the push for 4K TVs. The show floor in Las Vegas is set to be crammed with even more 4K TVs than before as the industry tries to encourage consumers to switch to the high resolution screens.

Sony has really got behind the effort in recent times, advancing the 4K movement on a number of fronts, from screens to watch the content on to cameras that allow you to create content and games consoles that bring 4K gaming.

This year, Samsung is putting up the challenge with QLED TVs – better colour, fancy new design –that use Quantum dot technology. So now there is another acronym to get your head around.

We know: it seems like only last year that Ireland got its first 4G network (actually it was 2013) but technology is moving at a fast pace and mobile technology is no exception.

It all seems a bit like deja vu. In 2016, 5G was the big talking point at industry events such as Mobile World Congress. This year’s CES will revisit the technology, showcasing the impact the technology will have on all businesses. With it comes the promise of better broadband, better home services and more innovation in everything from transport and smart cities to augmented and virtual reality.

“From the Internet of Things, to virtual reality to self-driving cars and beyond, connectivity is at the core of emerging innovation,” said Gary Shapiro, president and chief executive of the Consumer Technology Association. “With more than 3,800 exhibiting companies across 24 product categories, the true impact of connectivity will be unveiled at CES 2017.”

The jury may still be out in some quarters about the value of wearable technology and its future, but expect to see some indication in the coming days of where the sector is going. CES 2017 isn’t expected to be a big bang for fitness trackers or smartwatches, but already some interesting things are emerging. According to Shapiro, the event has seen “huge growth” in wearable devices aimed at improving sleep, health and fitness as well as sports tracking.

In fact, CES 2017 is gettings its very own sleep tech area this year, showcasing products to improve your sleep, from trackers and sensors to connected beds and alarms, such as ambient noise generator Nightingale.

In the area of personal care, Withings has a hairbrush that will help you tackle split ends and frizzy hair by telling you exactly where your technique is failing when brushing your hair.

Speaking of wearables, LG is also planning a wearable speaker that you can drape around your neck. If that sounds to you like a public transport nightmare, you’re not alone.

LG is no stranger to quirky products. Last year it unveiled the Rolling Bot, a security camera and home-monitoring device that was destined to be the bane of every pet’s life.

But take heart: just because something is announced at CES doesn’t mean it will automatically get a consumer launch, or that consumers will like it if it does. CES is full of vapourware, the stuff that will be talked about but will never hit the market. In some cases, that’s a good thing.

2016 may have been the year that virtual reality hit the mainstream market in a big way, but getting consumers to adopt it is another thing altogether. But CES 2017 is full of companies hoping that 2017 will see more of a shift towards the devices. Oculus isn’t on the show floor this year, but there are plenty out there selling their VR wares, from more affordable computers for use with VR systems to new ways of accessing the technology.

One startup – Scale 1 Portal – is offering a headset-free virtual reality game that doesn’t rely on a headset or tie you down with wires. And Intel’s press conference, which took place yesterday afternoon, was heavy on the VR hints in the run-up to the event.

There may be more about holographic platforms this year though. Already announced is Lenovo’s plan for a holographics Windows headset – the version debuted at CES 2017 was a non-working prototype – that should come down on the more affordable side of the spectrum.

That brings us neatly to your home. Consumers may not be flocking to smart home devices en masse just yet, with smart fridges, cookers and other large appliances still an oddity rather than the norm. But there are more and more devices popping up that make sense to include in your home. Nest’s learning thermostat, for example, or Samsung’s Smartthings hub, which controls everything from lights to motion detectors, are just some examples.

But this year, expect everything to be that much smarter. The advent of the Amazon Echo speaker, which includes its personal assistant ALexa, and Google’s version Google Home, has brought forth a whole new realm of possibilities. CES 2017 is set to be full of Alexa-related products. Already Lenovo has unveiled its Smart Assistant speaker, which uses Amazon’s technology, while GE has a lamp with Alexa for handsfree lighting at home. .Samsung also has a robot vacuum cleaner with Alexa built in, allowing you to order the cleaner to get to work with a few voice commands.

Last year, Ehang’s passenger drone was the attention grabber as people dreamed of a day when they could abandon the car for short trips and take their own personal drone instead.

Drones are back at CES 2017, with the intriguingly named “drone rodeo” being dangled in front of media attendees. Expect a lot of aerial photography promises in the coming days.

Over the past few years we’ve seen more car companies come to CES to show off the increasing level of automation in their vehicles.

This year should be no exception, with some of the major carmakers - Ford, Honda, BMW, Fiat Chrysler – showing off new cars and new tech. There should also be some electric cars on show.

Last year, startup Faraday Future made its CES debut with an attention grabbing concept car; this year, the company has returned to unveil its first production car.