The war online: how the West is playing catch-up with Islamic State 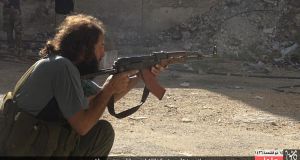 In June a leaked internal memo from the US State Department admitted Islamic State was winning the war online. The New York Times reported the IS’s “violent narrative – promulgated through thousands of messages each day – ha[d] effectively “trumped” the efforts of some of the world’s richest and most technologically advanced nations”.

IS hasn’t figured out some magic formula for the effective use of Twitter. But their message – promoting the Caliphate as a utopian world free from poverty, inequality, all governed under divine law – is clear and consistent.

Western attempts to counter the spread of IS ideas online have been anything but. The leaked US State department memo also suggested the “messaging working group”, made up of officials from the US, Britain and the United Arab Emirates (UAE), were not working well together. “The UAE is reticent, the Brits are overeager, and the working group structure is confusing,” it said.

Perhaps politics is complicating the task at hand. But others outside governmental circles have also taken the initiative to assess what clues social media might unearth in assisting the fight against the spread of terrorist movements.

The CyberSocio Intelligent-Systems Laboratory, aptly shortened to CySis, is based in Arizona State University and has been using both online and offline resources to gather information on the spread of extremism.

Their current research includes analysis of ‘information cascades’. Simply put, an information cascade occurs when people make a decision not based on their own better judgment, but because everyone else is doing it. Or as your mammy used to say, “If so-and-so jumped off a bridge, would you jump too?”.

Online information can spread in a similar way. If a particular news item, image or meme spreads in a variety of directions, it can be one of the main characteristics looked for in the kinds of online information cascades relevant to CySIS.

“We are looking at the structural diversity of messages that go viral,” explains Prof Paulo Shakarian. “When a message spreads to a variety of online communities, it’s more likely to go viral. So for example, if three work colleagues send you the same tweet, that’s only considered one source and so is unlikely to spread very far.

“However, if you were to receive the same tweet from a work colleague, an old college buddy and a family relation, that’s more significant.”

The ability to scientifically analyse the structural diversity of online communities is what makes research in this area novel. “We have created measurements for assessing the significance of the first 50 people a message spreads to based on structural diversity,” says Shakarian.

Social media like Twitter, or its Chinese equivalent Sina Weibo, are frequently used for data mining and big data analysis, principally because their users are sending out micro blogs in the public domain, meaning data protection is not an issue.

That being said, identifying what information is relevant to countering terrorist recruiting trends (or anything else) is not an easy task, given just how ubiquitous online communication has become.

“Collecting relevant social media data in large amounts is difficult,” says Shakarian. “We don’t need to counter every tweet sent by ISIS [Islamic State]. Most of what they do is not successful anyway. So sifting out the ineffective layers is a real challenge.”

Dr Hasan Davulcu from the School of Computing, Informatics, and Decision Systems Engineering at ASU has spent a number of years developing LookingGlass software, a tool that can be used to make sense of online data for the purposes of identifying security threats. LookingGlass “gathers, ingests, aggregates, normalises, enriches and analyses” data to create digestible threat intelligence.

“Many different kinds of ideas spread online,” says Davulcu. “Most things trending have certain linear patterns: some spike and then die off. But others spike and then take off. That’s what we tend to look for.”

The other interesting element to CySIS’s research relates to their use of people on the ground. The areas being focused on for the current project include Iraq, Syria, Nigeria, Indonesia, Malaysia and the UK.

In each country, they will have people on location assessing how extremism forms in that particular culture, and identify various terrorist or radical groups and their leaders.

“It helps us to understand the cultural relevancy of social media usage. People in different countries use Twitter in different ways.

“We have, for example, observed how ISIS used various online recruitment strategies, which didn’t work in one country but were successful in another.”

The combination of online and offline research will ultimately provide valuable scientific and cultural context for those combating terrorism.

“We can track incidents that happen in the news to see if there is any online activity before or after a terrorist attack that might help identify a group worth taking a closer look at,” says Davulcu.

“Or if governments in the West do something and people elsewhere protest, we can check to see what happens before and after an incident, analyse reactions by different groups, and assess whether they form a cohesive movement or just a random group.”

Their end goal is to create an online tool that analysts can use to look at any region in the world, and quickly identify the online activity of various groups.

“Take the recent bomb attack at the Erawan Shrine in Bangkok, which killed 20 people,” he says.

“If we wanted to know what is going on in Thailand, we could identify the different fractures within society – religious, political, economical – place them in their relevant factions, movements or groups, assess which have been most active online lately, and measure their activity. Which ones are excited about the bomb attack and which ones don’t care? Perhaps this type of information could indicate who might have been involved.”

1 How much state pension will I get next year?
2 Am I crazy to consider switching to an Ulster Bank mortgage?
3 Housing crisis here to stay in absence of big rethink, industry warns
4 Avolon appoints Paul Geaney as chief risk officer
5 PTSB plays down Ulster Bank talk as it sells €1.4bn of loans
Real news has value SUBSCRIBE