The Soundtrack of Life for music lovers 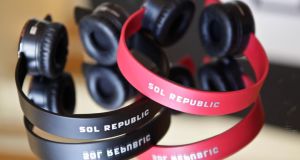 When SOL Republic was founded almost three years ago, it was with one aim in mind: to improve headphones for music lovers without costing the earth.

Founded by Kevin Lee, Scott Hix and Seth Combs, they proclaim themselves first and foremost as music lovers. Of course you might expect them to say that, but there is some impressive pedigree to stand over the claim – and to show they are not novices to the sector.

Lee is the son of Monster founder Noel Lee and was involved in the partnership between Beats Electronics and Monster to come up with Beats by Dre, the ubiquitous headphones that have become a must- have for a certain age group.

Now the brand that Lee helped to bring to prominence may be in Sol Republic’s sights, as the up-and-coming firm claws its way into music mindsets. Already it is ranked as the third most popular headphone brand in Ireland.

That vision – Sol Republic’s mission statement of sorts – was written on a beach in San Francisco by Lee and Combs, outlining exactly what the firm had come to embody since then. It’s even in the name – SOL stands for Soundtrack of Life.

“This is our North Star,” Combs says. “We are music lovers committed to changing the world one listener at a time. There are only two universal languages – mathematics and music.”

Sol Republic certainly promises a lot. Describing itself as “saviours of sound”, the company has forged partnerships with everyone from DJ Steve Aoki, DeadMau5 and even Calvin Harris. The latter partnership went beyond a simple customised look for headphones and involved redesigning its drivers to Harris’s specifications.

The end result is the professional Master Tracks, which comes with a pro cable and are noise isolating rather than cancelling. Sound, style and technology and make it accessible. There is also a less prosaic attraction for buyers of the firm’s headphones. Durability plays a large part.

Since it was established, the company has developed headphones that range from the cheaper Jax ear-buds to customisable Tracks that are almost indestructible.

Attention to detail is the key behind the company’s success.

“We have a hypothesis that music fans would rather have a pair of durable headphones than one that breaks,” Combs says. It may seem obvious, but simple things, such as a 90-degree headphone jack to reduce the likelihood of wires breaking and flextech headbands that can be bent in all directions without snapping, were the first additions.

Customisation, to fit with the requirement that headphones should be more fashion-focused, came with the interchangeable headphone bands and cables, which are available in multiple colours and designs. That range has since expanded to the higher-end Tracks Ultra and the wireless version, and its in-ear range, including Amps and the latest Relays, which were based on sport headphones.

Above all, though, they have to sound good. If you look on Sol Republic’s site, you’ll find little of the jargon that usually accompanies these products.

“Most people don’t care what the size the driver is, what the frequency response is, what the impedance is. They just want to know this: does it sound good with my music?” Combs adds. Instead, Sol Republic names its drivers, such as V8.

Every product has been designed from scratch by Sol. “Every headphone brand out there that cares about sound has their own sound signature,” he adds. “Kevin is our top-secret weapon in a lot of ways. He’ll listen to every type of track, every genre, to see if it still works for hip-hop, country, pop.”

Aside from its collaborations with music stars and a speaker deck that it designed with Motorola, Sol Republic has also hit headlines for a publicity stunt: headphones for cats. While the product – and its ad campaign – were tongue in cheek, 10 sets of cat headphones were actually made.

However, the existence of the product alone bears testament to how Sol Republic and its founders think when it comes to establishing itself in the music market.

And music is, as Combs says, the universal language, so why not have it spoken in a nicer way?