The next frontier in digital advertising? Your windscreen

Ads, directions and car information may be soon be front and centre on car journeys 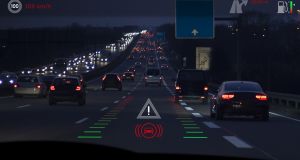 The next frontier in digital advertising may be your car’s windscreen.

Carmakers, technology companies and glass manufacturers are teaming up to turn the display that graces the front of an iPhone into the windshield of a car - one that can show ads, directions and vehicle information to the person behind the wheel.

The advent of connected cars is creating a new sales battleground, and using a vehicle’s windscreen may be the next way to pitch more products and services to consumers. McKinsey and Co. estimates that mobile and data-driven services in cars will generate $1.5 trillion by 2030. At least part of that will be spent projecting information to drivers and passengers right before their eyes.

“When you think of a person driving and what your needs are when you’re on a typical trip, it’s food, it’s fuel and it’s rest stops,” said John Butler, a Bloomberg Intelligence analyst. “Owning the inside of the car is critical, it’s really where the money is made. The real value is locked up in the ad opportunity.”

Here’s how a smart windscreen may work. A driver that’s close to running out of petrol would see an alert pop up that notes the fuel situation and offers to find a nearby petrol station. The car’s virtual assistant will offer a choice, again on the windscreen, of two options, including directions to a station where the driver is eligible for a free cup of coffee - an ad placed by the gas company that fits with the driver’s buying patterns, also known by his smart car.

Corning is starting to sell carmakers the glass used in Apple’s iPhones for windshields and in-car entertainment systems. The company said the durability and thinness of the glass means that any image projected onto it is sharper than onto a typical windshield. While the product is less than 10 inches wide, Corning is working to expand it to a full windshield-size display.

“They could be here in less than two years,” Corning chief technology officer Jeff Evenson said in an interview at CES, the consumer technology show in Las Vegas. “We’re making the car much more active to set things up for these kinds of services.”

Turning a car windscreen into a billboard is part of broader efforts by carmakers and tech companies to transform vehicles into connected devices. Multiple companies at CES this week have announced deals and partnerships that use software, digital voice technology and cloud computing to handle everything from automatically scheduling a maintenance appointment to ordering a takeout pizza while on the road.

Carmakers such as BMW, Hyundai Motor and Toyota already offer basic heads-up displays near the windshield in some models that show information such as the vehicle’s speed. Google parent Alphabet, through its Waze navigation app, suggests nearby restaurants and points of interest during your drive, as does TripAdvisor. The next step is merging these two ideas: projecting points of interest onto your windshield.

Eventually mapping and navigational data could be superimposed onto the road in front of the driver, much in the way that Google Street View currently displays information about an area on a static image. BMW, Volkswagen AG and Daimler acquired Nokia’s Here mapping unit in 2015 to ensure they were no longer dependent on Google for maps. Intel announced Tuesday it had acquired a 15 per cent stake in Here.

“This is exactly the sort of thing the high-end carmakers are promoting as part of their highly integrated, immersive ‘cockpit’ concepts,’” said Richard York, an executive at chip designer ARM who is responsible for automotive sales.

The question of how the technology is regulated remains open, given concerns about driver distraction. For now, suppliers are eager to promote heads-up displays as safety tools. For example, the speed and location of vehicles in a car’s blind spot might be projected onto the windshield.

Boosters also say a windshield display is a safer alternative than drivers taking their eyes off the road to glance down and tap a dashboard infotainment system or check a smartphone. For many years BMW, Volkswagen and Jaguar Land Rover Automotive worked with the Munich-based startup Metaio GmbH to investigate possible applications for augmented reality technology in cars, according to someone familiar with Metaio’s business.

The main hurdle to superimposing an enhanced image for the driver was the “tracking problem” - establishing the direction of a driver’s gaze and adapting the image projected onto the windscreen accordingly, the person said. Metaio was acquired by Apple last year, and ended its contracts with the carmakers.

People usually understand information presented in an augmented reality format more quickly than on paper or a smartphone, according to Sunny Webb, who leads Accenture Plc.’s research and development efforts in augmented and virtual reality. That makes AR an appealing medium through which to present location-based ads, as well as safety and contextual information to drivers.

“Being able to overlay content in a windshield is a really interesting application,” she said. “There’s a lot of energy going into how to distribute content to passengers and drivers.”

Meanwhile, Harman International Industries, the in-car infotainment systems giant in the process of being acquired by Samsung Electronics, is moving into heads-up displays. In December it announced an investment in Navdy, a San Francisco-based maker of a projection display that sits on the dashboard in front of the windshield and provides navigation guidance, car behavior data and smartphone alerts. The two companies will start selling a jointly branded heads-up display this year.

Automotive supplier Magna International also is likely to unveil an augmented reality product with a major German carmaker this year, according to someone familiar with the plan.

Carmakers also are considering the ability to push content such as video in front of passengers in addition to mapping or road services as a way to generate more revenue from each vehicle.

“We want to have our direct customer relationship delivering premium services to them and being their direct contact,” Klaus Froehlich, BMW’s head of research and development, told reporters at CES. “That’s the clear goal for a premium car manufacturer.”