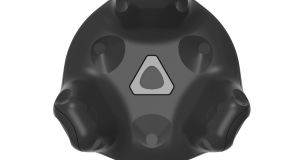 The new HTC Vive Tracker, a motion tracking sensor that can be attached to physical objects, making them useable while wearing the Vive headset. Photograph: PA

HTC has revealed a new virtual reality sensor that enables users of their Vive VR system to bring any physical object into the virtual world.

The Taiwanese tech giant announced the Vive Tracker, a motion tracking sensor that can be attached to physical objects, making them useable while wearing the Vive headset.

Making the announcement at CES in Las Vegas, HTC showed off early examples of Tracker accessories, including a camera that enables users to take pictures in VR for the first time, as well as a pair of gloves and rifles designed for use in shooting games.

Vive’s Daniel O’Brien said expanding the ecosystem around the Vive headset was crucial to its future development.

“To foster the long-term growth of VR, we want to make it even easier for developers to prototype and market more immersive controllers and accessories,” he said.

“The Vive Tracker is the first step in growing an ecosystem of third-party accessories that will change how we interact with virtual experiences and provide consumers and businesses with an unlimited amount of content opportunities.”

HTC also introduced a new Deluxe Audio Strap that comes with adjustable headphones that the firm says improve comfort when using Vive as well as reduce the amount of wires needed when wearing the system.

The firm said both new accessories would go on sale in the second quarter of 2017, but is yet to confirm pricing.

Virtual reality saw a dramatic increase in popularity last year as three major systems — including Vive — were launched to consumers.