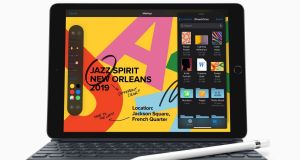 Last year Apple announced a new iPad, one that was not only compatible with the Apple Pencil but wouldn’t break the bank. This year’s version, the seventh generation, has just been announced, putting some extra display space in there. The screen has jumped from 9.7 inches to 10.2 inches, and you get the benefit of some upgraded hardware, most notably the inclusion of the smart connector. That may not sound like much, but it means you can get some of the accessories that you see on the more high-spec ipads, such as the Smart Keyboard case.

The device still runs on the same A10 Fusion chip as its predecessor did, and sticks with the first-gen Apple Pencil. It’s currently available for preorder at Apple.com, and will be available from the end of the month. apple.com