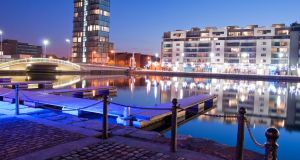 The influx of technology companies and their well-paid employees have contributed to Dublin’s housing crisis, and both companies and individuals could do more to help solve it, according to a panel of housing activists at the Re:publica digital society conference Thursday in Dublin.

Throughout the first day of the two-day event in the Light House Cinema - a spin-off of a popular Berlin-based conference - the emphasis was as much on “society” as “digital”.

As technology companies flood into the city centre “we’re not going to see housing provided for families, but houses provided for single people and couples. And as long as people are willing to pay the high rents it’s going to keep driving up the rents,” said Aisling Hedderman of the North Dublin Bay Housing Crisis Community.

However as those workers get older, have families and need larger homes, they are likely to find themselves struggling for affordable housing alongside those from other professions and communities, she noted.

People in direct provision who are moving out of such facilities are being pushed into a housing market where they are not only competing against those able to pay high rents but also face attempts to pitch them against people on social welfare, noted journalist Caelainn Hogan.

“People come with that fear that ‘they (people in direct provision) get the houses’ but that’s not the case. Of we work together, we can help each other,” said direct provision activist Lucky Khambule of the Movement of Asylum Seekers Ireland.

“There are those who want us to see differences amongst ourselves but we want to get the message out that no, we are together.”

Some 190,000 properties are lying vacant so “it’s not hard to solve the housing crisis” if policy changes were made, such as introducing a vacancy tax, rent caps, and mortgage debt relief, as well as building more social housing, said Tommy Gavin of the Irish Housing Network.

He also said AirBnB short term rentals removed potential housing stock from the market. A significant proportion of such rentals are owned by multiple-property owners, he said, not people renting out a room.

However, he said the pressing issue was not what technology companies do.

“Really, the question is, what’s the responsibility of the State. The Government has built the lowest level of social housing in the history of the State,” he said. The State says it prefers to find “market solutions” but real people get caught in the middle, Gavin added.

More important is what the individuals who work for such companies do, he said. They shouldn’t be pitted against other groups in the community but work together. They could get involved in community housing groups, talk to politicians, and push for better housing for all.

Hogan pointed out the irony of many technology companies obtaining new office space in redeveloped buildings that were in Nama, when Nama stock could have been used for housing instead.

She also said that many tech companies campaigned on a social issue like marriage equality but were saying little about the housing crisis.

1 Irish company paid €1.2m a year by collapsed Blumenthal-linked Australian restaurant
2 Hugo MacNeill steps back from Goldman Sachs role
3 Should AIB compensate me for upsetting letter on arrears?
4 Artomatix buyer revealed as Unity Technologies
5 Why bosses should not be afraid of speaking out on Instagram
Real news has value SUBSCRIBE