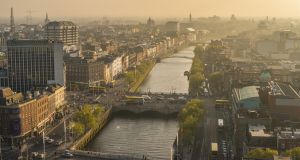 Segment said it chose Dublin as its (EMEA) headquarters because of the city’s large, highly-skilled, multilingual workforce, and its role as a leading technology hub. Photograph: iStock

Segment, a San Francisco-headquartered technology company that has raised over $100 million (€85 million) in funding, plans to create 100 jobs in Ireland over the next three years.

The company made the announcement as it opened its new European headquarters in Dublin.

It said it is looking to hire for positions at all levels across the business, including leadership, pre-sales, post-sales, support, customer success, technical roles, marketing and partnerships.

“Segment is experiencing a tremendous amount of growth right now, and Ireland will serve as a great stepping-stone for us as we further grow into the European market,” said Grace O’Rourke Veitch, head of Europe, Middle East and Africa (EMEA) at Segment.

Segment is a customer data platform provider which uses a single application programming interface (API) to collect and send customer data to over 200 analytics and marketing tools automatically.

The company has more than 15,000 customers globally including IBM, Levi’s, Trivago, Gap, Time and LogMeIn.

Named to Forbes’ annual list of Top 100 Cloud Companies two years in a row, Segment has experienced rapid growth since it was established in 2011.

The company now has more than 250 employees and offices in San Francisco, New York and Vancouver, Canada.

Last year it raised $64 million in a Series C funding round led by the Y Combinator Continuity Fund to bring total fundraising to date to $108 million.

Segment said it chose Dublin as its (EMEA) headquarters because of the city’s large, highly-skilled, multilingual workforce, and its role as a leading technology hub.

“Dublin’s talented workforce, its strong relationship with the US and the rest of Europe, and Ireland’s full embrace of user privacy rights makes our decision to be headquartered in Ireland an easy one,” said Peter Reinhardt, chief executive and co-founder of Segment.

The investment is supported by the Irish Government through IDA Ireland.