Tech Tools: instant film cameras are having a bit of a comeback 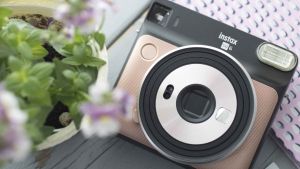 You have to admire the Fujifilm, launching an analogue camera in a digital world, ploughing its own path, one instant photo at a time.

The Instax Square SQ6 is the kind of camera we rejected because the digital cameras we were getting were newer, shinier, more high tech and far more convenient. Remember the days when Polaroids were the only way you could get an instant photograph? By 2008, the company had filed for bankruptcy a second time and a new campaign to save the technology was under way.

Ten years on and, kind of like vinyl, instant film cameras have had a bit of a comeback. Fujifilm Instax is not Polaroid. But it’s a similar technology. You snap the photograph, it pops out of the camera, and you wait for the photograph to appear on the paper. It’s not exactly instant, but “takes a couple of minutes to develop” film doesn’t have quite the same ring to it.

The Instax cameras have been around for a couple of years, joined by photo printers, and use two different types of film – the original Instax Mini and the square format.

The SQ6 uses the square film. The advantages are obvious: more space means you line up shots more easily; and you don’t get to decide between landscape or portrait when capturing your images.

The SQ6 is the new kid on the block. It’s not the most subtle of cameras – bigger film means bigger camera body – so it’s not one you can slip into your pocket and go. But it certainly proves a talking point. The version of the camera tested here is the blush gold one, and it is definitely eye catching. On the occasions I used it in public, people wanted to know what it was I was using.

When it comes to ease of use, this camera has it nailed. The film comes in a cartridge that you simply pop in the back. Like old-school film, once you’ve done this, don’t open the back again or you’ll expose the film.

Shooting with it is a breeze too. There aren’t any fancy electronic viewfinders or LCD panels, but there’s an automatic function that picks out the best settings for your shooting conditions, adjusting the shutter speed and flash.

My three year old is obsessed with photographs, from selfies on my phone to watching what she refers to as “magic pictures” developing right before her eyes.

Even she managed to get the hang of this camera, although it was a little on the large side for her.

There is a selfie mode, with a mirror that helps you line up the shot, located on the camera lens. Your selfie game has to be on point though; there are no second chances with this camera, unless you’re feeling flush and have invested in a lot of film.

If you are feeling creative, there is a double exposure mode that will overlap two pictures on the same film. My experiences with this were mixed, but it was more to do with a lack of skill and poor picture framing than any fault on the camera’s part. Digital photography has made me a little lazy; knowing I can always reshoot or edit the final image means I don’t have to take as much care lining up shots.

There’s a landscape mode and a macro one too, and you can change up the look of your shots with one of the three coloured filters included in the box for the flash.

Fun, easy to use and you get your photos in a few minutes. No longer are your photos marooned on your cloud storage, never to be looked at again. Plus it makes you hone your skills, as you have limited film and burst shots aren’t a possibility.

In a world where we are used to digital images, the idea that you now have to ration your pictures because it will cost you a small fortune in film will be a bit of a mindshift. On the positive side, you won’t force your entire friends list on Facebook to look at 30 pictures of the same scene, each from a marginally different angle. Plus if you are in any way concerned about waste, there’s a lot to deal with here – the plastic cartridges, the wrapping.

The different modes can be changed with a button on the back, and a small light shows you which mode you are using.

Overall, it’s a fun camera that is easy to pick up and use, regardless of your level of ability. But if you want to get a bit creative, you’ll have to work at it a bit.

1 ‘I’m so lucky to be in the Caribbean – a million miles from Derry Girls’
2 Michael Smurfit: ‘I asked Trump to invite me to the White House for my 80th birthday’
3 Covid-19: Small businesses are left as cannon fodder in our zealous anti-virus experiment
4 Irish business of Carluccio’s restaurants to be wound up
5 Revenue fears fraudsters tapped bank details of 3,000 taxpayers
Real news has value SUBSCRIBE