Stripe valued at $35bn after raising an additional $250m

Online payments company was founded by Limerick-born brothers in 2010 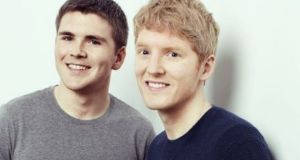 Stripe co-founders John and Patrick Collison are estimated to be worth about $2.1 billion each, according to Forbes

Stripe, the online payments company founded by Limerick-born brothers Patrick and John Collison, is now valued at €35 billion (€31.6 billion) after it raised a further $250 million (€226 million) from investors.

This marks a significant jump in valuation for the fintech given that it was estimated to be worth $22.5 billion (€20.3 billion) at the start of the year.

Sequoia Capital, General Catalyst and Andreessen Horowitz were among the investors to partake in the latest fundraise. Overall, the company has raised about $1.2 billion (€1 billion) over the last nine years.

Stripe said it will use the additional capital to accelerate international expansion, grow its product suite further and extend its enterprise capabilities.

Established in 2010, Stripe handles billions of dollars in transactions each year and counts the likes of Amazon, Uber, Booking. com, Deliveroo and Google among its customers.

Although the company has recorded phenomenal growth since it was established, the company’s founders insist it has barely begun to take advantage of the opportunities open to it given that only a tiny amount of global commerce currently happens online.

“Even now, in 2019, less than 8 per cent of commerce happens online,” said John Collison, Stripe’s president. “We’re investing now to build the infrastructure that’ll power internet commerce in 2030 – and beyond. If we get it right, we can help the internet fulfil its potential as an engine for global economic progress.”

The company, which is headquartered in Silicon Valley, earlier this year announced plans to create hundreds of additional engineering jobs in Dublin after securing an e-money licence from the Central Bank.

Stripe set up an international engineering hub – its first outside of the United States – in Dublin early last year. It initially announced plans to take on a small number of employees but the success of the local operation led it to decide to take on many more software engineers over the coming years.

The company currently employs 200 people locally, including 65 engineers. Globally, Stripe has more than 2,000 employees in 14 offices globally and it is available in 34 countries presently, rising to 40 in the next few months.

The Collison brothers are estimated to be worth about $2.1 billion (€1.9 billion) each, according to Forbes.

Dublin is regarded as a key driver for Stripe’s continued expansion. Earlier this month, the company expanded into eight new markets after also launching its subscription billing service locally just over a year after it went live in North America.

The company has beefed up its leadership team locally by bringing in Google veteran Matt Henderson to head up product strategy and hiring former Salesforce executive Eileen O’Mara as its head of revenue and growth for Europe, the Middle East and Africa (EMEA).

Stripe is currently heavily focused on opportunities arising from strong customer authentication (SCA) compliance. This is new European-wide legislation that requires businesses to build an extra layer of authentication into online card payments.

As part of its efforts in this space Stripe has developed its own services and also recently acquired Irish fintech start-up Touchtech Payments, a company that provides advanced SCA technology for start-ups such as N26 and TransferWise, as well as more traditional financial institutions.