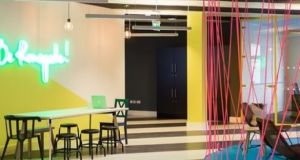 Huckletree, a pan-European co-working space provider and start-up accelerator, has announced plans to establish a new fintech-focused hub in Dublin.

Located on Shelbourne Road in Ballsbridge, the new 23,500sq ft facility is set to open before the end of the year. It is intended to rival similar centres such as Barclays Rise in London and Lhoft in Luxembourg.

Huckletree already has a co-working space in the Academy building on Pearse Street that is home to 40 organisations, including the Silicon Valley Bank. It also has similar operations in London, Manchester and Oslo. By the end of this year, Huckletree forecasts it will have more than 2,000 members across its various working spaces.

Co-founded by Irishman Andrew Lynch in 2015, the company has raised more than €10 million from backers such as investment manager Meyer Bergman and Revolt Ventures.

“I’ve always believed that there is so much quality talent in Ireland and a new generation of founders coming through who are not playing small – they’re thinking big and global from day one – but what’s missing is a place where all of these fintech players can work, collaborate and do business under one roof and get on with it,” said Mr Lynch.

“Today we are excited to announce plans for a space that can match that brave ambition and give these companies the physical platform, infrastructure, social community and confidence to internationalise and scale to unicorn status,” he added.

The new fintech-focused hub in Dublin 4 is backed by IDA Ireland, whose head of technology Leo Clancy, said the facility would help further establish what is already a “vibrant” fintech sector in the Republic.