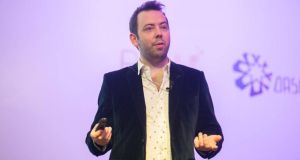 Techstars London managing director Eamonn Carey: “There are people with great experience here but the angel funding bit of the puzzle is still missing.”

Irish start-ups should stop rushing to open offices in Silicon Valley or New York and consider looking east instead for future growth opportunities.

That is according to Eamonn Carey, managing director at Techstars London, part of the prestigious global accelerator which has accepted more than 1,000 companies into its various programmes since it was established 12 years ago.

The Irishman also expressed hope for a Dublin chapter of Techstars, although he said conditions are not right for one currently.

Mr Carey, who is in Dublin to take part in a fireside chat on Thursday for the pre-accelerator programme Start-up Boost, previously ran Techstars Connection in New York and was an entrepreneur in residence on the accelerator’s Barclays-backed fintech programme in London.

The early-stage investor, adviser and board member for companies across the United States, Europe and Asia knows what he is talking about, particularly as he has previously established a number of start-ups himself.

Speaking to The Irish Times ahead of his visit to Dublin, Mr Carey said that while early-stage companies were drawn to the US as they expand, they could gain more from looking towards Asia.

“Think of Japan, Taiwan or even China rather than just immediately opening an office in California or New York. There are obviously challenges in doing this, particularly from a linguistic point of view, but there also some big advantages. If you can get the right partners in these markets then there are big opportunities,” he said.

Mr Carey said Irish companies were known throughout the world and this therefore gave them credibility. He added that a certain novelty value could also be of benefit for start-ups in Asia.

“If you go to New York and want to meet a big company such as Budweiser you are just one of a thousand firms pitching to them, whereas if you got to Tokyo and seek a meeting with Nissan you might be the only Irish company and one of only a handful from Europe knocking at their door,” he said.

Mr Carey added that there were plenty of incentives for companies looking eastwards. These include Japanese venture capital firms actively helping European start-ups to set up in Japan, and the Hong Kong Stock Exchange introducing measures to make it easier for companies to list at an earlier stage.

Techstars London is currently seeking applications for its latest accelerator and Mr Carey said he hoped Irish companies would apply for the programme.

The average funding raised by each Techstars graduate company is about $3 million and a number of Irish start-ups have participated in its various accelerators over the years including SwiftComply, KonnectAgain and Jumble.

However, while Mr Carey said that both he and Connor Murphy, the former DataHug founder who is now running Techstar’s SAP.io programme in Berlin would like to see a Dublin accelerator, it isn’t likely in the near future.

“Could we do a Techstars programme in Dublin? I think so. If we did I think we’d look at doing a vertically-focused one, such as for foodtech, agritech, travel and tourism or fintech. I’d love to see it happen but there are some structural issues that need to be addressed beforehand though,” he said.

“We look at different criteria when deciding where to go and that includes the strength of the local ecosystem, which I think generally in Ireland is very strong. But what we still don’t have is a good investment strategy in terms of tax relief for early-stage investors. There are people with great experience here but the angel funding bit of the puzzle is still missing,” said Mr Carey.