Company is not renewing contract with outsourcing group Arise 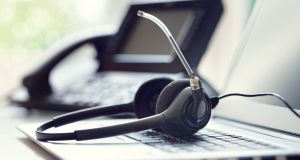 A spokeswoman for Vodafone confirmed it had recently taken customer care functions in-house.

Some 100 jobs have been lost in Limerick after Vodafone decided to take its technical support services in-house.

Contact centre outsourcing company Arise had hoped to replace many of the threatened jobs after securing a number of new contracts outside Vodafone but it has been unable to do so, in part because of the Covid-19 crisis.

Staff working at the contact centre in the Raheen Business Park, who are due to lose their jobs at the end of this month, have voiced frustration at being asked to support the training of their replacements who are based at offshore call centres outside the State.

Arise initially said that about 40 jobs would be lost following the decision by Vodafone not to renew its contract after 10 years. Those affected were due to finish in late March, but many more employees are now scheduled to lose their jobs later this month.

“I completely understand that redundancies happen in any company but the annoying thing here is that they are expecting us to help and train the new staff when we are losing our jobs to them,” one employee who asked not to be named told The Irish Times.

“We were also helping them in areas leading up to February to now find out that it was because they were moving it over to them,” the employee added.

A spokeswoman for Vodafone confirmed it had recently taken customer care functions in-house.

“At Vodafone Ireland, we continuously review our business models and processes. As part of this, we took the decision not to renew our contract with Arise and to move our care function to our Vodafone shared services centre.

“This move will ensure that we can build towards a converged journey for our customers through all aspects of our support services,” she said.

“We have been working closely with Arise through this process and want to thank them for their service,” the spokeswoman added.

Arise did not respond to a request for comment.