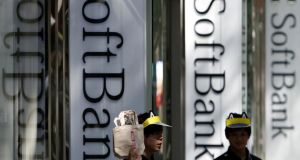 Irish start-ups may be in line for a boost from Japanese firm SoftBank as the company comes to Dublin to participate in the smart cities test bed.

The company is open to considering partnerships with indigenous firms to help with the projects it is planning in the future.

“At SoftBank, it’s the first time to do business here, with the project in Dublin. This is just a first step.There has to be second and third steps,” said SoftBank’s vice president of global business strategy Hidebumi Kitahara. “We are very open.”

Up to 300 start-ups attended an event around last week’s announcement of SoftBank’s involvement with the smart cities project.

It has already provided smart solutions for local authorities in Japan, but the project in Dublin is its first European venture into smart cities. It is intended to serve as a blueprint for the roll out of smart cities throughout Europe.

One thing for the successful implementation of IoT will be the roll out of 5G technology. Although Dublin has good coverage in terms of 3G and 4G technology, Mr Kitahara said 5G would be key for IoT’s success.

He said security would also be a big consideration for IoT implementations, with the need for a secure platform end to end.

“We are providing the revolution through technology but on the other hand we have to take care of securities,” he said.

But the partnerships with Irish firms need not be limited to the smart cities project. SoftBank actively invests in cutting edge tech start-ups, and has one of the largest tech investment funds in the world.

The $100 billion Vision Fund has backed WeWork, Slack and ARM Holdings, among others. The fund is backed by investors such as Apple, Qualcomm and Foxconn, along with sovereign wealth funds in Saudi Arabia and Dubai.

In May, SoftBank Group chief executive Masayoshi Son said a second Vision Fund would come in the near future, but there are no firm plans yet.