Smartfrog takeover of Canary is music to homeowners’ ears 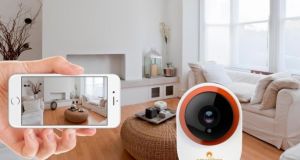 Smartfrog has developed a universal Internet of Things platform, starting with security and monitoring with its Smartfrog app, Smartfrog cam and video storage

Dublin-based technology firm Smartfrog has taken a controlling stake in US-based rival Canary. The takeover brings together the two smart home security companies following a €25 million investment by Smartfrog in its US counterpart.

Both companies will now be led by chief executive Charles Fraenkl, who said: “By joining forces, the group will be well positioned in an increasingly competitive market.”

A statement from the company said that Canary and Smartfrog have complementary products, technologies, markets, business models and sales channels.

Established in 2014, Smartfrog opened its office in Ireland in 2015. It also has offices in Germany, China and Switzerland. The firm has developed a universal Internet of Things platform, starting with security and monitoring with its Smartfrog app, Smartfrog cam and video storage.

While Smartfrog focused mainly on Europe, Canary built a market leadership position in the US.

Smartfrog follows a pure SaaS (Software as a Service) offering with over 90 per cent direct sales, whereas Canary offers its products mainly in retail, with over 10,000 points of sale and almost half of customers attaching a service-based subscription.

1 Bank leaked my loan request to family who tried to rip me off
2 Coronavirus: Irish holding back on holiday plans
3 Irish IT group Ergo foils major ransomware attack
4 No more jail time for Willie McAteer over Anglo loan fraud
5 Digicel’s earnings rise as it looks towards refinancing $1.3bn of bonds
Real news has value SUBSCRIBE