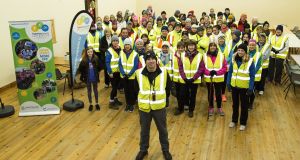 Siúl Eile groups have completed more than 200 walks involving about 700 people who between them have walked more than 40,000km, according to founder founder Noel Fleming (front).

Noel Fleming is a performance and life coach who believes not just in talking the talk but also in walking the walk – literally. In April this year he set up Siúl Eile to promote walking as a means of improving health, combating isolation, strengthening rural communities, creating social networks and making people more aware of the natural beauty that surrounds them.

Siúl Eile falls under the heading of social enterprise and Fleming is one of the first entrepreneurs to graduate from the newly created BNest social incubator based at the Nexus centre at the University of Limerick. Originally from a commercial background in bookmaking, Fleming jumped ship in 2010 to retrain as life coach and for the last year or so has combined setting up Siúl Eile with looking after his five young daughters, including one-year-old twins.

“I’m from Clogheen in Co Tipperary, which is a rural mountain area and a really scenic part of the country with the Vee as a standout beauty spot giving panoramic views of the Munster vales,” Fleming says.

“The area is also surrounded by four mountain ranges – the Knockmealdowns, Galtees, Slievenamon and the Comeraghs – and is totally unique in that it is a crossroads for four long national trails. However, any time I would go on a walk I would encounter very few locals. I started leading a few walking programmes in the area and then seized on the opportunity offered by the GAA’s Healthy Club Project to organise four walks a week for 12 weeks during which we explored the Knockmealdowns and also part of the Galtees with a group of 160 locals.

“The primary objective of showcasing what was on our doorstep was realised, but a few unexpected things also materialised from the programme,” Fleming adds. “The walks brought neighbours together that would hardly ever get the opportunity to see each other and relationships strengthened naturally. People didn’t want to miss the walks and we discovered they really enjoyed the social aspect of the walking.”

Fleming spent six months (part-time) at the BNest incubator during which he had the opportunity to shape his idea into a social enterprise. “Without BNest, Siúl Eile’s impact would have been limited to the Clogheen area whereas now we are looking to spread Siúl Eile to communities all around the country,” he says.

“Since participating in BNest we have added groups in Clonmel and Ardfinnan. As of now, we have done over 200 walks involving about 700 people who between them have walked over 40,000km. The walkers are of all ages, ranging from four to 87. Our intention is to continue to scale up, firstly covering the Munster vales region and then further afield.”

Fleming has self-funded the start-up costs to the tune of about €15,000 plus “a few pairs of well-worn walking shoes,” and has promoted the business mainly through social media and word of mouth. “The sight of 50-60 walkers on a quiet country road on a cold frosty night in November tends to set local tongues wagging,” he says.

As this is a social enterprise, making money is not Fleming’s top priority. Most of the walks are free or have a €3 charge to take part. However, he hopes to start generating a modest income from the venture by getting paid by bodies such as Get Ireland Walking to set up and run programmes in other parts of the country. He also organises “challenge” walks which have an entry fee of between €10 and €40.