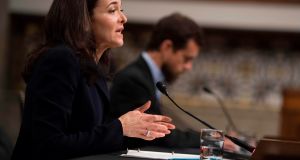 Sheryl Sandberg, the chief operating officer of Facebook, has admitted to US senators that the company has been “too slow” to spot Russia’s attempts to use its platform to interfere in election campaigns.

In her first congressional hearing since it emerged that foreign agents have also tried to influence voters ahead of the upcoming US midterm elections, Ms Sandberg said: “We were too slow to spot this and too slow to act. That’s on us. This interference was completely unacceptable.”

The Senate intelligence committee is questioning Ms Sandberg and Jack Dorsey, Twitter’s chief executive, as it searches for ways to tackle the growing threat posed by foreign attempts to sow disinformation and create political division.

The committee criticised Google after Larry Page, the chief executive of its parent company Alphabet, declined an invitation to appear. The committee refused to take testimony instead from Kent Walker, senior vice-president at Google.

Senators will be trying to push the executives towards finding policy solutions to the problem - including possible regulation - in this hearing, the last planned by the Senate intelligence committee on the topic.

Senator Richard Burr, the Republican chair of the committee, said social media platforms put adversaries in the position “to win wars without firing a shot”.

“We have identified the problem, now it is about finding the solutions,” he said in his opening remarks.

Senator Mark Warner, the Democratic vice-chair of the committee, hinted at more regulation for tech companies.

“I’m sceptical that ultimately you’ll be able to truly address this challenge on your own. I believe Congress is going to have to act,” he said.

Facebook has discovered “co-ordinated inauthentic behaviour” aimed at influencing the November elections in the US, including the organisation of real life protests.

Alongside Google and Twitter, it also recently revealed an Iranian campaign to influence politics in the US, UK and elsewhere that dated back to 2013.

But Ms Sandberg said Facebook’s investment in fighting such interference is starting to pay off. “We’re getting better at finding and combating our adversaries, from financially motivated troll farms to sophisticated military intelligence operations,” she said in written testimony released before the hearing.

The testimony came as a new poll, conducted in the wake of the controversy over the use of Facebook data by Cambridge Analytica, showed that Americans might be spending significantly less time on the site, taking breaks of up to weeks at a time.

The poll from the Pew Research Center said 42 per cent of US adults who use Facebook have taken a break from the site in the past year, and that 54 per cent had adjusted their privacy settings.

The number of Facebook’s US monthly active users held steady in the past quarter, but the company has not released recent figures for how long each user is spending on the site. If time spent is declining in the US, the world’s largest advertising market, this could hit future revenue.

Mr Warner berated Google for not sending a representative to the hearing, listing the “structural vulnerabilities” Google faces from search to YouTube to Gmail. “I am deeply disappointed that Google, one of the most influential political platforms in the world, chose not to send someone,” said the senator.

Mr Walker, of Google, said he would brief members of the committee and Congress in private. In a blog post, he said Google’s efforts to prevent the misuse of its platforms started long before the 2016 election.

Mr Dorsey faces two congressional hearings on Wednesday. After the Senate committee, the Twitter chief executive will be questioned by the House energy and commerce committee.

The House committee will focus on problems with content moderation and censorship, as some Republicans including President Donald Trump accuse the tech platforms of holding an “anti-conservative bias”. Mr Dorsey told Politico this week that he did not think it was “fair” that Twitter was appearing without the other platforms, who have been accused of the same bias.

In his written testimony published ahead of the House hearing, Mr Dorsey said he was trying to earn the trust of users of the messaging platform by making its decisions on what content to remove as transparent as possible.

“Twitter does not use political ideology to make any decisions, whether related to ranking content on our service or how we enforce our rules. We believe strongly in being impartial, and we strive to enforce our rules impartially,” he said. – Copyright The Financial Times Limited 2018