Samsung to roll out contactless pay in UK, Ireland 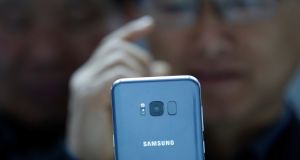 Samsung expects to launch its contactless payment system Samsung Pay in the UK during the summer, with Ireland to follow shortly after.*

According to Conor Pierce, Samsung’s vice-president of mobile for UK and Ireland, the new payment technology could hit the market in mid- to late summer.

There are no indications which banks will take up the technology, but Mr Pierce said getting the backing of the financial institutions was vital to its success.

“It’s really important when we launch to make sure we have good coverage,” he said. “All the banks are very supportive, but we need to make sure it’s lined up and we have all the partners integrated that we need.”

He pointed to Transport for London’s use of contactless mobile payment technology alongside its smart cards as a way of paying on buses and trains in the city as something that could work in Ireland.

“We need to do that. It’s inevitable, that’s going to happen. There will definitely come a time when people are used to using their phone or watch [to pay].”

The move follows the launch of Android Pay in December last year and Apple Pay in March.

Mobile contactless payments are generally considered more secure than contactless cards, which have been in use in Ireland since 2011, as the card number is not passed to the retailer. Instead, a virtual number is used for transactions. The systems also have extra security features in place – including passcodes and fingerprint security – and can be remotely wiped should the phone be lost or stolen.

Samsung Pay and Apple Pay can also be used on the respective companies’ smart watches. Although there have been dire predictions about the future of the wearables sector, Samsung is curently on its sixth generation of wearable devices and Mr Pierce said the introduction of Samsung Pay would only strengthen the division.

“Rather than fumbling around in your wallet or even your phone, you’ll just swipe your watch instead,” he said. “I’m very confident in the future of wearables.”

* This article was corrected 10.04.17 to amend information previously provided by Samsung.

1 Belgium helps Ireland to a Brexit boon
2 ‘My rent here is so low it’s a joke’
3 This charming man: how Paschal Donohoe won the Eurogroup presidency
4 Can Grafton Street stop the flood of closures?
5 New Powerscourt Springs hotel to open in defiance of virus gloom
Real news has value SUBSCRIBE