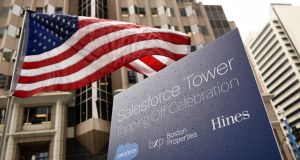 Turnover for the year at Salesforce.com’s Irish arm was €426.9 million, an 82 per cent rise year on year. Photograph: Michael Short/Bloomberg

Turnover and profit at the Irish arm of Salesforce. com">Salesforce.com, SFDC Ireland, rose significantly in its fiscal year 2016, the latest accounts for the firm show.

The company said the jump was due to the increase in reseller fees in the Europe, Middle East and Africa region, which totalled $430 million (€406 million) last year. Commission revenue fell to $13.7 million (€12.93 million) for the year, from $56.3 million (€53.1 million) a year earlier, and the company recorded no royalty revenue in 2016.

SFDC Ireland markets and sells Salesforce.com’s products and services in EMEA, along with consulting and support services for customers. California-based Salesforce.com, which was founded by current chief executive Marc Benioff and Parker Harris in 1999, offers cloud-based marketing and sales software to clients.

The company restructured its EMEA operations on September 1st, 2014, giving SFDC Ireland the licence to operate the group’s business in the region.

Although the company made a profit, the accounts stated the directors were not recommending a dividend, with the profit being credited to reserves.

The firm declined to comment further on the accounts.

SFDC employed 757 people at the end of the fiscal year – mostly in sales – up from 653 a year earlier. The Irish arm of Salesforce.com, which is based in Sandyford, is also expected to see the benefit of Salesforce’s planned European expansion, which it announced last year.

The company is currently recruiting for a number of roles on its website, including sales and business development staff, along with software and technical support engineers.