Revolut targets 2m Irish customers as it takes on Stripe 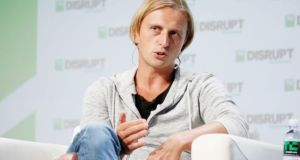 Revolut now has 1.2 million customers in the Republic and is highly confident it can surpass two million given the rate at which it is growing locally.

“One in three Irish adults now has a Revolut account and on Black Friday alone we had more than 400,000 people in Ireland shopping via Revolut,” co-founder and chief executive Nikolay Storonsky told The Irish Times.

“You need to remember as well that we have our business accounts, which are growing fast and for which there is a huge opportunity for us in Ireland, he added.

His comments come as Revolut on Friday announced the launch of an affordable acquiring solution for businesses that allow them to install plug-in checkout software or build their own custom features to take card payments online. The new solution sees them going up against Stripe, the online payments company founded by Irish brothers Patrick and John Collison, as well as other rivals like Dutch competitor, Ayden.

With the new acquiring solution, business customers can take advantage of low fees and competitive rates, with a 1.3 per cent fee for UK and EEA cards, and a 2.8 per cent one for other regions. Customers on paid plans also receive an allowance of free card payment acceptance every month at no additional cost.

Founded in July 2015 by Mr Storonsky and Vlad Yatsenko and now valued at$5.5 billion, Revolut is best known for consumer-oriented services. However it has been pushing deeper into business banking of late. Revolut Business has gained over 500,000 clients since it launched three years ago.

“Because we have a very strong brand we’ve already gotten over a half a million business customers and the deeper we go then the more businesses we’ll have,” said Mr Storonsky, speaking on the fringes of the Web Summit.

He described the new acquiring solution as a “game-changer for businesses” as it “offers better value to business customers than Ayden or Stripe.” He also said Revolut acts as a one-stop solution for organisations providing all they could need in one place.

“Ultimately, our services are unmatched both on the retail side and for business because if you look across the globe you will not find a financial services provider that offers such a great product either for free, or for such low pricing,” he said.

Mr Storonsky stressed that the Republic of Ireland is one of the company’s main centres given it is now being used as a base to support the fintech’s banking operations for the whole of Western Europe.

Revolut earlier this year announced it was applying for an e-money licence from the Central Bank as it confirmed plans to shift responsibility for its European payments from London to Dublin due to Brexit . The move sees the company more than doubling its headcount locally.

Headquartered in London and employing some 2,000 people globally, Revolut has processed more than one billion transactions worth over $100 billion since it was founded.

It reported a pre-tax loss of £107 million last year as revenues jumped 180 per cent to £163 million. Overall, the company has 12 million customers globally.

Mr Storonsky said revenues declined by 40 per cent during the early days of the pandemic but that the company was now up to 50 per cent ahead of its revenue forecasts now due largely to cost cutting. He said the company had been forced to hit pause in terms of expansion as a result of the Covid crisis. He said the company is now actively considering a number of new markets, including India and the Philippines.