Review: Does the DeX do away with your laptop? 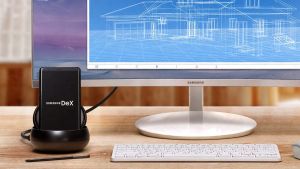 The DeX docking station performed well in photo editing, creating documents and so on, with a user interface that’s optimised for a larger screen instead of a mobile device.

Can you replace your entire desktop with a mobile phone and a dock? The ultimate in travelling light, that’s what the Samsung DeX promised for Galaxy S8 owners. The dock turns the phone into almost a fully featured system, adding HDMI to connect to an external display, USB ports and ethernet. Throw in bluetooth keyboards and mouse connection, plus some specially adapted versions of Android apps and you get a full screen experience in surprisingly small package.

It isn’t a new idea as such. Microsoft tried something similar with its Lumia phones and Windows 10, with a compact dock that transformed your phone into the brains of a computer. Before that, both HP and Motorola had a crack at it. But we’re still lugging laptops around, so it’s safe to say the idea hasn’t had the traction that the companies were expecting.

The DeX has one trump card though – the Samsung Galaxy S8. The device is more powerful than my very first laptop, but at a fraction of the size, and can function as my main work device day to day while I’m on the move. In saying that, it’s worth pointing out that times have moved on significantly since the days of my very first laptop. Not only has technology advanced significantly, but the demands we place on it have also taken a giant leap. So how does the DeX stand up, bearing that in mind?

The truth is that it’s a mixed bag. The DeX docking station performed well in some instances – photo editing, creating documents, and so on – with a user interface that’s optimised for a larger screen instead of a mobile device. I sent a few emails, worked on some documents and spreadsheets, with very little issue. It was hard to remember that this was on a phone instead of a laptop.

The DeX itself is compact, with a flip out cover for the USB port that connects your phone to the dock. Pop the phone into the dock and you are ready to get going. It also works as a charging dock too. As a solution for travelling light, the DeX is a compelling one, at least on the face of it.

But it’s not all great. There are a few issues to note. My desktop can be a bit of a busy place: multiple programmes open, several tabs in Safari, you get the general idea. DeX will support this to a certain extent, but push it too far and you’ll hit the limits of the system. Treating the DeX and phone like my regular desktop, I got a memory warning on a couple of occasions.

At the end of the day, it’s still a smartphone and comes with its own limitations. The biggest is that you forget not everything is made to work with the large screen format. When you come across such an app, it’s jarring.

One of Samsung’s selling points is that the phone is still a phone, even when it’s plugged into the dock. That means that phone calls, text messages and so on can still be accessed through the taskbar. But once you plug the phone into DeX, it disables the screen on your phone. That means you can’t use your phone to control anything, and instead must have peripherals such as a mouse and keyboard on hand. Being realistic, if you want to dock your phone you’ll already be looking to add extra peripherals. It also means if you want to use your phone to read messages or emails, anyone in view of your monitor will see it too.

The DeX has extra ports, but one thing it doesn’t have is a headphone jack. That shouldn’t be a problem for two reasons. First, you’ll only need it if you want decent audio – say for presentations with the DeX or video calls – and second, the S8 has its own headphone jack. The latter point, however, fails because the positioning of the phone in the dock means you can’t get at the headphone jack. So if you want to use the DeX for presentations, be prepared to pack bluetooth peripherals, adding to your load. You could rely on the built-in microphone and speaker, but while it’s adequate, it’s not suitable for all situations.

DeX is a good way to make your phone do more, and could replace your laptop for several tasks. There’s also a good mix of apps available that will work properly with DeX, covering communications, productivity, etc. Other apps will work in a more limited mode, or in a “mobile view”. It’s not pretty, but it works.

It only works with the S8 and S8 Plus. That rules out older phones, although that may be a blessing in disguise if you want to keep your frustration levels under control. You’ll also need to travel with some accessories, which negates the “travel light” benefit somewhat. Some apps aren’t really suitable for DeX, and there’s no guarantee they ever will be.

DeX adds HDMI and USB ports to the Samsung set-up, but only if you have one of the company’s latest handsets. The upcoming Note 8 will also support DeX, as you’d expect.

A useful extension to your smartphone, but will it replace the desktop completely? For most people, not yet.