Revenues down at BT Ireland but business ‘performing well’ 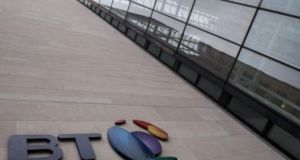 BT Ireland has reported a fall in sales and profits for the year to end-March 2020, due primarily to the transfer of customer accounts to another group company.

BT said that, in addition to the transfer of two customer accounts to another group division, revenues were also affected by the once-off sale of equipment to a major multinational customer a year earlier.

Excluding the transfer of customer accounts, revenue was down 5 per cent and operating profit was flat year-on-year.

“Overall, our 2019/20 company performance is in line with the previous year, as we continued to attract and retain business with multinational corporations, major indigenous organisations and other local telecoms operators, and expanded the range of products and services being provided,” a spokeswoman said.

“With regards to the current financial year, our business is performing well, and we’ve taken steps to support our customers through this extremely challenging time,” she added.

The company paid a €85 million dividend to its parent in 2020, unchanged from the prior year.

BT Communications Ireland Limited provides global connectivity and networked IT services to both the public and private sector. It also offers wholesale network services to more than 50 communications companies.

The company said it benefited from higher trading volumes after the coronavirus pandemic led to lockdowns locally due to increased demand for online network and conferencing services. However, it had this had been partly offset by lower trading on managed services.

BT employed 683 people at the end of March 2020 and had staff costs totalling €59.2 million, which includes share-based payments.

BT Group announced plans to establish a standalone subsidiary in the Republic last November to manage its global procurement needs which will have a £13 billion (€14.5 billion) annual budget. The unit, BT Sourced, is to officially open for business in April. Last week it announced plans to create more than 70 new jobs in Dublin.