Recognising the opportunity that enables machines to see 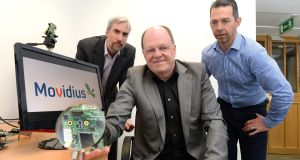 Back in 2011, Irish start-up Movidius was trying to tap into the 3D market with a silicon chip that could be integrated into phones to work with software that delivered glasses-free 3D.

In a way, the Myriad chip was a little ahead of its time. The 3D market failed to reach its projected potential, and the idea of a 3D-enabled mobile phone or tablet has been dismissed.

However, the work Movidius carried out in the area has not gone to waste. The company has established itself as a significant player in the vision-sensing technology field, and its efforts paid off with some high-profile deals this year.

First was a deal with Google that saw the tech giant license Movidius’s technology to bring image processing to products. Then came a deal with China’s DJI – a renowned drone maker – for its Phantom 4 aerial camera. Movidius garnered huge international publicity by equipping the drone with the capability to sense potential collisions and track objects. A third deal with Flir will see the companies collaborate on a new thermal camera. And the one that got everyone excited last month was the Fathom USB stick – a standalone module that will allow developers to create smart products, essentially functioning as artificial intelligence on a stick.

It’s all down to the tiny Myriad 2 chip, the second generation of the semiconductor for the company and the one that has helped it hit some big names. The early work on 3D has also lent a hand.

“A few planets have aligned,” says Seán Mitchell, Movidius co-founder and chief operating officer of the company. “A lot of the work we’re doing now, if you think about depth extraction from cameras, it’s all that 3D understanding of the space. It’s applied a little differently but it does leverage off all those assets.

“The timing is pretty good because I think we’re at a position where we have a platform that’s pretty unique in the market at least at the moment.”

He estimates the company has several years’ lead in terms of what they’re offering in both performance and power, along with the cost of the device.

“Every month it seems to be more in demand across these internet of things markets that are requiring this kind of vision intelligence,” he says.

So Movidius is looking good right now. The company recently closed a $100 million (€87 million) funding round with investors that gives it a cushion.

However, a few years ago, things weren’t looking quite so certain.

“Between our first generation of Myriad and getting to the point of investing in Myriad 2 and assembling the investors and money required to do that, it was very much a touch and go period,” says Mitchell. “While we did get Myriad 1 into the market and did productise it, it didn’t go into volumes that could sustain the company.”

Fortunately, Myriad 2 was waiting in the wings and the product that had the potential to raise the company to the next level. The only problem was persuading investors it was worth taking another chance. Funding for semiconductors had become increasingly difficult since the economic crash. If they had failed to get the investment over the line, the founders would have been faced with a difficult decision.

“I think even at that point we felt we had built something that had value, but it had further to go before really getting it fully commercialised,” says Mitchell. “If that investment wasn’t forthcoming, we would have had to figure out what to do with the technology. We wouldn’t have been able to sustain the size of the team we had on board at that stage for very long.”

The team, at the time, was 60-strong. Luckily, the funding came in, Myriad 2 was developed, and the founding team didn’t have to make that decision.

Now Movidius employs more than140 people, having more than doubled in 18 months, and it looks like it will be hiring again on the back of its Fathom announcement.

Mitchell and his co-founders have been very clear about where they see the internet of things going: smarter products that don’t burden networks with too much unnecessary information. That could be a security camera that can distinguish between a cat and a burglar, or a staff member and an intruder.

Vision-sensing technology has wider applications than many realise. It can be used in everything from self-driving cars to mobile phones, enabling augmented reality and improving camera technology.

Now, Mitchell says, the company has a different set of problems. “There’s no less pressure,” he says. “I think our challenge is one of scaling – the organisation, the revenues, getting the company to a profitable position which, off the back of some of these projects, we should be driving towards.”

The company has been heavily investing in developing its chips in the last few years . Abridged accounts for 2014 show accumulated losses of €63 million.

“We’re always moving to the latest silicon process nodes. It’s a very expensive process,” says Mitchell. “If we stop the R&D investment we would be profitable very quickly and the cost base would a lot lower, but then you wouldn’t sustain the business.”

The team is already working on the next product to keep the momentum that Movidius has built in recent months going.

“In this industry you can’t rest on the laurels of the previous product. Already we’ve ramped up the team, investing in the product that will follow Myriad 2,” says Mitchell.

The company’s success could bring it to the attention of bigger players in the market. Is a buy-out or merger on the cards?

“The company is certainly not for sale,” says Mitchell. He isn’t ruling out a flotation though. “We see a very big opportunity in front of us. I think the management team and the syndicate of investors we have are not lacking in ambition in that regard. I think we can certainly see a scenario where Movidius remains an independent company into the future.”

When Movidius announced in January that it had signed a deal with Google for the use of its vision processing chip, it kicked off a string of announcements by the Dublin-based company.

But it was not the first time that Google and Movidius have worked side-by-side.

The Dublin start-up was also involved with Google’s Project Tango, which dabbled with computer vision and 3D sensors in a smartphone or tablet.

Back when the project was announced in 2014, it generated a bit of a buzz around the technology and Movidius as the possibilities were explored.

The sensors would allow the device to create a visual map of a room, for example, which could improve indoor navigation.

So it was no real surprise to see the two companies were working together yet again.

In January, Movidius said Google would license the vision processor Myriad 2 for use in its future devices.

It was a chip Movidius had designed with feedback from its customers, who were clear about what they needed from the next generation of the Myriad.

Unlike the later deal with DJI for the Phantom 4, there was no product that could be linked immediately with Movidius.

At the time of the announcement, Google didn’t say exactly what it will use the chip in to start with, but there were reports that the company was planning a standalone virtual reality headset that would feature the Myriad 2 chip.

The appeal of the reported headset?

It wouldn’t require a computer or a phone to power it; the headset would have its own screen and a powerful processor, with the Myriad 2 employed to bring head tracking to the device.

But you may also see Myriad 2 making an appearance in future Google phones.

Because the chip is low power yet capable of handling complex tasks, it could be used in smartphones or other portable devices to perform tasks that are currently enabled by the cloud. The chip could in theory, make smartphones actually smart and far less reliant on a good internet connection by bringing context to things.

That, in turn, would make it possible for the device itself to learn from and make decisions based on a device’s surroundings for example.

The deal with DJI made it much easier to visualise exactly how the technology would work.

The Phantom 4 drone uses the vision processing chip to bring a certain level of intelligence to the drone, allowing it to avoid collisions, for example, or fly to a certain point picked out on a visual controller.