Campaign migrates registered office for its website so it can retain .eu internet address 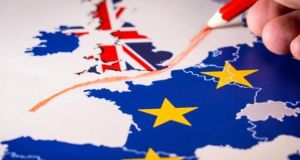 Many social media users have mocked Leave.EU’s move and accused it of hypocrisy

Leave.EU, a pro-Brexit campaign bankrolled by UKIP backer Arron Banks, has migrated its registered office for its website to Waterford so that it can retain its ‘.eu’ internet address.

The move, first reported by the Euractiv website, comes as more than 80,000 .eu domain suffixes belonging to British users were recently suspended following Britain’s withdrawal from the European Union.

EUrid, the European registry for the .eu domain, recently wrote to all UK registrants to inform them their domains were no longer compliant with its regulatory framework and were therefore suspended until at least the end of March. The decision means that registrants do not have access to many basic functional features such as email or basic website services unless they relocate outside of Britain. Registrants are also restricted from applying for any new .eu domains.

Losing access to the .eu suffix also impacts on website ranking results, hence Leave.EU’s decision to relocate to Waterford ahead of Britain’s exit from the EU last week.

Many social media users have mocked Leave.EU’s move and accused it of hypocrisy.

Leave.EU was a rival to Vote Leave, which was designated as the official Leave campaign during the 2016 Brexit referendum campaign. It was fined £70,000 by the Electoral Commission in Britain May 2018 for exceeding spending limits for “non-party registered campaigners.” However, an investigation by the National Crime Agency found no evidence of criminal offences. A criminal inquiry by the Metropolitan Police also found insufficient evidence to justify further action

Another pro-Brexit campaigner, Jacob Rees-Mogg, was also accused of hypocrisy when Somerset Capital Management, a hedge fund manager in which he owns a 15 per cent stake, set up two funds in Dublin to give it continued access to the EU after Britain’s exit.

Fine Gael’s spokesman on European Affairs Neale Richmond said the relocation of Leave.eu was unwelcome given the group’s”reprehensible record.”

“Leave.eu is an odious campaign group that’s spread fear and disinformation throughout the Brexit referendum and subsequent negotiation process,” he said.

Mr Richmond questioned the legitimacy of the move and warned about the Republic becoming a “brass plate of convenience” for the grouping.