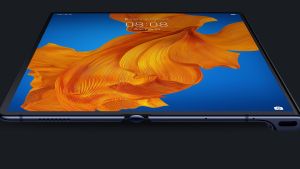 When folded as a standard phone, it’s hard to tell that it is even flexible, although you will notice the fold when the screen is opened out. Photograph: Huawei.com

To fold or not to fold? That is the question facing prospective mobile phone buyers. Folding phones are still a niche product. On the expensive side for the average user, but an attention grabbing option all the same, the folding phone bridges the gap between a compact smartphone and a larger tablet.

The Huawei Mate Xs is the follow up to the original Mate X, which was delayed and then launched only in China. There are few differences – a redesigned hinge here, some 5G there – but it is largely the same device. When folded closed, the Mate Xs has a display wrapped around the outside of the phone, with a 6.6 inch display on the front that can be used as a standard smartphone; the secondary 6.38 inch display can be used when taking photos.

It feels a little chunky when folded up but it’s not too cumbersome.

Push a button and the screen folds out to an eight inch display that is perfect for reading documents, searching websites, or watching video. The display may not be glass thanks to its flexible nature, but it is OLED, which means the quality is superb.

The screen has a fold in the centre, but that’s only obvious when the display is turned off. Once it is active, the vibrance of the display makes it far less visible; it’s not completely gone, but you don’t notice it too much. You can feel it though, and if you are used to the smooth glass of smartphones, the flexible screen might be a little disconcerting at first. The screen feels a little spongy around the fold.

That previously mentioned hinge is where the charging port, camera unit, power and volume buttons are all located. It also gives you something to grip on to, which is handy when you consider the potential price tag of the device and what the repair costs could be.

On the inside, the Mate Xs is powered by Huawei’s own Kirin 990 octa-core processor, with 8GB of RAM and 512GB of storage. That can be expanded with a nano SD card, with an additional 256GB up for grabs. You may not need that extra storage though, as 512GB is quite generous, even when you take into account the space eaten up by the operating system.

That is unless you like to take a lot of photos and video. Like all recent Huawei phones over the past couple of years, the Mate Xs uses Leica lenses, with a quad camera set up.

It is a departure from the norm. With the Samsung Z Fold2, there are separate rear and front cameras; the Huawei option has only the one camera array. It includes a 40 megapixel wide angle lens, a 16 megapixel ultra wide angle lens, a 8 megapixel telephoto and the time-of-flight camera for sensing depth.

There is no front facing camera as such; to take a selfie, you close up the display and turn it so the camera is facing you. You don’t actually need a second camera, because the flexibility of the Mate Xs makes it irrelevant.

As you’d expect, the camera quality is excellent. And because you don’t have to decide between the front and rear facing camera, there is no loss of quality just because you want to take a selfie. You get the same low light performance and optical image stabilisation that you would if you were using it as a rear facing camera.

The display on the Mate Xs is stunning, even taking the fold into account. When folded as a standard phone, it’s hard to tell that it is even flexible, although you will notice the fold when the screen is opened out.

The camera is also, as you would expect, a good performer. Shots are rich and detailed, even in low light, as you have come to expect from the Leica partnership with Huawei.

The Mate Xs, unfortunately, suffers from the same drawback as other new Huawei phones: it doesn’t have Google services on it. And while, for some, that may be a bonus, the average user doesn’t want to have to spend time with constant updates just to make sure that the apps you have managed to get on to the device will work.If you aren’t ready to sever the link with Google, this phone may not be for you.

There’s a decent sized battery tucked away in here – 4500 mAh – and generous storage at 512GB. But the one thing the Mate Xs lacks is water and dust protection, with no rating for either on the specs.

A different take on the foldable phone than Samsung’s but it works – as long as you can live without Google.