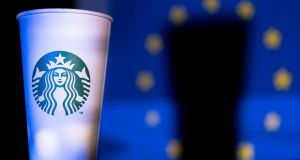 The General Court moved to overturn a 2015 commission decision that Starbucks received an unfair tax deal amounting to about €30 million from the Netherlands. Photograph: Kenzo Tribouillard/AFP/Getty

The European Commission’s decision three years ago that Ireland gave Apple €13 billion of illegal tax aid has been given a partial boost by a court verdict in another contested case, involving US coffee chain Starbucks, according to competition lawyers.

The EU’s second-highest court, the General Court, moved on Tuesday to overturn a 2015 commission decision that Starbucks received an unfair tax deal amounting to about €30 million from the Netherlands.

However, the court said the commission was correct in assessing transactions between different parts of Starbucks, which determined what profits were taxable under the Dutch tax rate, on an “arm’s length principle” – as if they were not related companies. The transactions included green coffee beans and royalties covering coffee-roasting expertise.

The main argument of the Irish Government and Apple in their appeals against the commission is that it was wrong in assessing the iPhone maker’s tax liability in Ireland on the premise that valuable intellectual property (IP) behind group products lay in two Irish branches.

They contend that that the IP was based in, and controlled from, Apple’s headquarters in Cupertino, California.

The second strand to the commission’s case is that even if the IP was held outside the Irish branches, Revenue did not apply a proper arms-length principle in working out what profits from European sales routed through Cork could be taxed in the Republic. The case centres around tax “rulings” Revenue gave to the US group in 1991 and 2007.

Ireland has consistently argued that there were no arms-length principles in Irish law at the time of the rulings. Still, Brussels has insisted the principle is enshrined in the Treaty of the Functioning of the EU and backed up by case law.

“The arm’s length finding regarding the Starbucks case potentially boosts part of the European Commission’s Apple decision, as it would play into the commission’s secondary argument in relation to the Apple case, that Ireland did not use the arm’s-length principle correctly,” said Philip Andrews, a partner at Dublin-based law firm McCann Fitzgerald, which is not involved in the case.

While the commission’s main argument in the Apple case gave rise to the full €13 billion tax decision, lawyers representing the Government at a hearing before the general court in Luxembourg last week said that assessing the case only along the second element – along the lines of the commission’s preferred arm’s length principle methodology – points to a figure of about €1 billion.

Separately, the general court ruled on Tuesday that Luxembourg gave a unit of carmaker Fiat Chrysler about €30 million of unfair tax deals, backing up an earlier finding by the commission.

“The principles laid down in these judgments provide some ammunition for both the taxpayers and the commission in the ongoing investigations,” said Natura Garcia, a lawyer with Linklaters in London, according to Bloomberg.

Luxembourg and Fiat are assessing whether it will appeal Tuesday’s ruling before the Court of Justice of the European Union.

“The judgments confirm that, while member states have exclusive competence in determining their laws concerning direct taxation, they must do so in respect of EU law, including state aid rules,” said EU competition commissioner Margrethe Vestager.