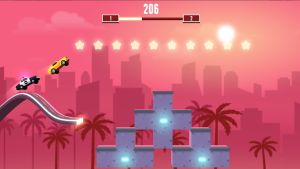 Highway Heat is addictive. Very addictive. Unlike other racing games, you don’t control the car, you control the road, drawing the route and all its quirks as the cars race. On the car’s tail is a succession of police vehicles, who are also at the mercy of your whims.

The aim is to survive long enough to pick up the required bounty, dodging a succession of obstacles as you go. You control the track by swiping up and down, or by touching a point on the screen. It sounds simple, right? It’s not. It’s deceptively difficult.

Highway Heat is a fast paced game, so you have to think quickly. And this is where your reflexes will let you down. Smooth movements are the way forward if you want a consistent route through the level. Swipe even a fraction in the wrong direction or touch the screen in the wrong place and you will send your car flying into the air, which means it’s harder to control and far more likely to slam into a wall.

On the other hand, it also makes it far more exciting. The right flick in the right place can send your car soaring over obstacles and out of reach of the pursuing police vehicles. There’s a certain sense of satisfaction at pulling off one of these moves.

there’s also a bit of luck involved too. On occasion I glanced off some of the obstacles and bounced rtaher than exploded. You quickly pick up which part is acceptable to hit and which will turn you into a fiery ball of scrap metal.

Figuring these things out will also help you improve your high score. Collect stars along the way, or get some air and you’ll see your final total rise. You can also go off road, or ditch the police cars chasing you by tricking them into hitting obstacles.

And that is what keeps you coming back. It’s free too, although ad supported, which you can remove by paying a few euro.

Caught by the fuzz pedal: Gaz Coombes on his top Supergrass songs
7

Are we ready for Martin McDonagh’s satirical look at sectarian violence?
9

Carson, the uncrowned King of Ulster
10