Over 2,000 march in Athenry in support of Apple data centre 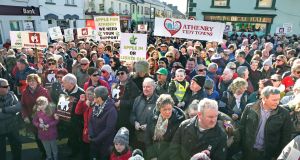 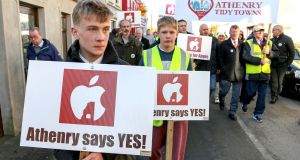 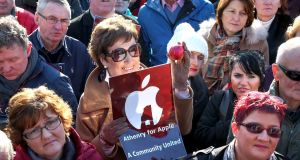 More than 2,000 people staged a march through Athenry on Sunday to show their support for the development of an €850 million data centre on the outskirts of the Co Galway town.

Local residents were joined by people from Galway city and surrounding towns and villages in a show of support for the development of the facility on lands owned by Coillte at Derrydonnell.

The event took place a day before Apple seeks High Court approval to fast-track a judicial review over planning approval for the data centre. An Bord Pleanála turned down an appeal to the plan to build eight data halls on the 500-acre site, giving the green light to the scheme in August.

However, two local residents, Sinéad Fitzpatrick and Allan Daly, along with Wicklow landowner Brian McDonagh, have since applied to the High Court for a judicial review on environmental grounds.

Local Fine Gael councillor Peter Feeney said there was a danger that the impression could be given that there was widespread objection to the building of the facility.

“That is not the case and the vast majority of people in the area are whole-heartedly behind this. When Apple announced its plans in February 2015, everyone felt, this is brilliant, this is exactly what Athenry needed, a shot in the arm to give it a lift – the biggest company in the world coming to a small town. “That’s a long time ago now and we have gone through a torturous process of planning.

“Hope has been in poor supply in this country and this gave us hope. We want the hope that we can have our children around us, as many as we can. This isn’t going to be the cure-all but we have a great local industry in Athenry and across east Galway,” he said.

Businessman Pat Joyce said the project would be a huge boost for the region. “There is great support for it. It’s very important for Athenry and the greater community that Apple get the go-ahead.”

Minister of State at the OPW, Sean Canney, said that the Apple project was “one beacon of light for rural Ireland”.

Sean Kyne, Minister of State for Gaeltacht Affairs, said there was cross-party support for the project and that the vast majority of local people were also behind it. “We would be a laughing stock if this was lost at this stage – Galway would be and Ireland would be, nationally and internationally,” he said.

A motion to have a legal challenge by the three objectors to the plan entered on to the commercial list will be heard by the High Court on Monday, the day before a listed hearing on the judicial review application.

Apple first announced its intention to invest in the Athenry data centre in February 2015, the same day as it announced a similar €850 million investment in Denmark. Construction on the Danish centre is already well advanced, while the Irish proposal remains stalled.

The centre is due to be built on Coillte-owned lands in the Derrydonnell area, some three miles outside the town. Neither Coillte nor the IDA would divulge details of the land transfer to Apple.

A review could delay a final decision by at least a year and possibly up to 18 months. This has prompted Apple to express alarm to senior State officials and local supporters, who fear the investment could be lost.

The court has not yet formally granted a full judicial review of the proposed development, although it has granted the objectors leave to seek one. An Bord Pleanála could yet oppose the application for a review, although this would be considered unlikely and a full review looks set to be ordered on Tuesday.

Apple’s move in recent days to ask the Commercial Court to step in will, however, change that timeframe. If the matter is accepted on to the commercial list, a decision would be expected next spring.

1 House asking prices rebound but will likely fall again - MyHome
2 Plans for €2bn Dart expansion lure Bombardier to Dublin
3 Ireland has among highest rates of home-working during Covid
4 TV guide: Pros and cons of broadcast television options
5 There may be trouble ahead for the housing market
Real news has value SUBSCRIBE