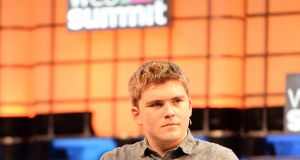 John Collison of Stripe speaking at the Web Summit in the RDS Dublin: the mobile payments firm is moving into a Dublin’s docklands building. Photograph: Eric Luke

It almost passed by unnoticed on Christmas Eve, but Stripe, the mobile payments business founded by those young turk Collison brothers from Limerick, has signed a lease on the 45,000 sq ft One Building on Dublin’s docklands.

Stripe, which was valued at a heart-stopping $5 billion in a recent fundraising, may use only part of the building initially, according to a detailed report on the Silicon Republic website that appeared while the rest of the Irish business media was getting ready for the arrival of Santa.

However, Don O’Leary, the European head of Stripe, told the website the property deal “cements our Irish roots [and] provides enough space to gradually expand our team”.

That should eventually translate into good news on the Dublin job front, although Stripe may have to do battle with its new neighbours, Google and Facebook, to snap up the best staff.

Speaking of the two big beasts of the internet, it seems many of the city’s burgeoning tech giants have similar tastes when it comes to property.

Lo and behold, Jones has scored a techie hipster hat-trick as it also built the One Building that is the new European home to Stripe.

Meanwhile, the Collison brothers, John and Patrick, are featured in a highly complimentary article in the upcoming issue of Forbes magazine.

The article says the staff of their San Francisco office know company president John, aged 25, is in the building when they see his North Face backpack lying about the floor.

He doesn’t have a desk, apparently.