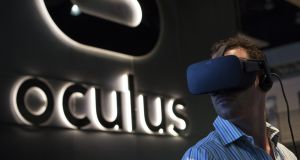 Facebook has been pushing virtual reality as the next big thing. Photographer: Troy Harvey/Bloomberg

Oculus took over the office last year by acquiring by InfiniLED, which develops low-powered LED technology.

The plan is to develop LED (light emitting diode) technology for virtual-reality devices.

There is speculation Oculus may soon seek a bigger premises for the office.

The nine engineering/research specialist roles are being advertised on Facebook, which acquired Oculus, best known for its Oculus Rift headsets, in 2014 for $2 billion.

Facebook has been pushing virtual reality as the next big thing despite a lukewarm response from the public.

According to a report in the New York Times, chief executive Mark Zuckerberg said the social network could end up spending over $3 billion developing the technology over the next decade.

In addition to the Oculus jobs, Facebook is seeking to recruit over 100 new staff to fill roles across its Irish operations in Dublin and Meath.

The positions are across a range of business functions and teams including marketing, sales, gaming, finance, data centre operations and management.