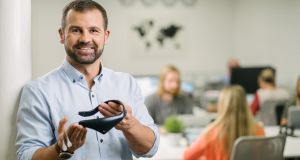 Modius Sleep stimulates the vestibular nerve through an electrical pulse, affecting the areas of the hypothalamus and brain stem that control circadian rhythm and sleep patterns.

The headset is worn for 30 minutes before bed, and aims to reduce the time it takes to fall asleep, keeping wearers asleep for longer.

Modius Sleep was developedby neuroscientist Dr Jason McKeown, a native of Belfast and founder of the company.

“Our new headset taps into the power of the brain’s hypothalamus, which acts as a mini computer and influences many areas of the brain, including weight loss and sleep,” he said. “Our continued aim is to help people avoid sedatives and sleeping pills as they only mask the underlying problem and come with a host of nasty side effects.”

This is not the company’s first attempt at crowd-funding; its first headset, Modius Slim, which is designed to help wearers lose weight, raised £2 million. Users of the Slim headset reported improved sleep as a side-effect, leading to the development of the new product.

“After gathering feedback from thousands of Slim device users around the world, what we found was that improved sleep was a welcomed bonus reaction and this became our motivation for making specific changes to our technology to create Modius Sleep,” he said.

Dr McKeown said the new band stimulated the brain in a different way to the the Slim version, to ensure it achieved its primary focus of improving sleep.

The company has carried out an initial 30-day study into the effectiveness of the device, which found that 95 per cent of Sleep users improved their “sleep score”, and more than 70 per cent of those with sleep issues said they had experienced positive changes when using Modius Sleep.

The company is also targetting prescription status for the Slim band in the US, which will allow it to offer a higher powered device. Dr McKeown described it as “the ultimate goal”, and said the company expected to increase its current 18 staff to 30 over the next 18 months, with most of those roles expected to go to the Belfast office.

1 Life as a Facebook moderator: ‘People are awful. This is what my job has taught me’
2 Irish in-flight entertainment firm blames coronavirus for closure
3 Ibec warns that Government may have underestimated corporation tax loss
4 How well paid do you think you are? Here’s how to work it out
5 Flight attendent seeks High Court injunction against Aer Lingus
Real news has value SUBSCRIBE