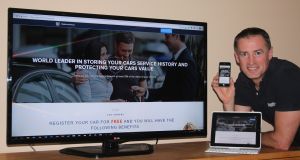 MyServiceHistory founder Niall Devine: “Our platform is available to any servicer or dealer for any make and model of car. This is unique in the market.”

Niall Devine is a car enthusiast. He likes to look after his vehicles and is meticulous about regular servicing. Having spoken to his friends on the subject however, he found he was in the minority and this ignited the thought process for what has since become the NovaUCD-based start-up, MyServiceHistory.

“I set about conducting a large-scale survey of people’s car maintenance habits and quickly realised most of them hadn’t a clue about servicing or important dates for their cars,” Devine says.

“At the same time it became clear that they would be willing to pay someone to stay on top of things for them by keeping their service history online and sending them reminders. Over 65 per cent said they would pay €10 or more and this is essentially how MyServiceHistory came into being.

“Service history information is typically worth 10 per cent of the value of a car so it’s definitely something very costly for a car owner to lose,” Devine continues. “In addition, the pitfalls of missing important car dates are not well known, but they can be substantial. For example it can be problematic and very costly to buy insurance without a valid NCT.”

Devine and his co-founder, Jedzrej Danko, started work on the project in late 2015. Their platform is two sided and offers a service to car owners and to dealers and independent service outlets. For owners, the platform stores and maintains a digital service history for their vehicle and sends alerts when service, tax, insurance or the NCT are due. It also sends notifications for tyre and mileage checks. For service providers and dealers, it is positioned as an automated automotive marketing platform.

“Marketing can be difficult for servicers and dealers as no one really wants to get emails from them until their car is due for maintenance,” Devine says. “Our platform combines the information car owners want to receive with the information the servicer wants them to have such as servicing deals, new model launches, finance offers and so on, all under the servicer’s own brand.”

MyServiceHistory will be launched to dealers by the end of October. The roll-out will start here with the United Kingdom, United States, Australia and New Zealand to follow.

Devine is not a start-up rookie. In 2007 he established the online fundraising platform, MyCharity, which was subsequently acquired by a US company. Devine continued to run it until a year ago when he left to focus on developing development MyServiceHistory. His co-founder Danko was also his partner in MyCharity and is the software developer behind both ventures.

“Our platform is available to any servicer or dealer for any make and model of car. This is unique in the market,” Devine says. “Some car brands have closed systems designed to keep owners coming back and they never really own the information about the car, the servicer does. With MyServiceHistory the owner is firmly in control of their vehicle’s service history.”

The cost of the service to car owners is €30 a year if they sign up directly but it can also be acquired for free through their dealer or service provider if they are MyServiceHistory users. Dealers and service providers will pay upwards from €75 a month to use the service depending on the level of bespoke branding required. For example, dynamic content such as car reviews tailored to a user’s profile can be added.

The costs incurred by the business so far have been approximately €95,000 with some of this coming from an investment by Growing Capital. “This low figure is down to bootstrapping and to the fact we were doing consultancy work while developing the platform,” Devine says.

“The AA offers something similar in the UK but only to its customers. Our superior offering delivers our customers’ messages to their customers under their brand.”