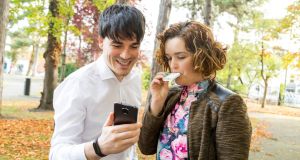 The company, which has developed an innovative portable digestive tracker, intends to use the financing to take on additional staff as it prepares to takes its device to market.

Breed Reply, a London-headquartered investor in early-stage Internet of Things (IoT) businesses, led the funding round with additional investors including SOSV, a $300 million (€254 million) venture capital fund established by Mr O’Sullivan, who previously founded MapInfo and starred in Dragons’ Den.

SOSV runs accelerator programmes in areas such as hardware and robotics, synthetic biology and biodesign, software and disruptive food in Ireland, the United States and China. FoodMarble, which was founded in Dublin in early 2016, was previously accepted on the VC fund’s Hax accelerator programme in Shenzhen, China.

The company was established by chief executive Aonghus Shortt, Lisa Ruttledge, Peter Harte and James Brief. Its flagship product is Aire, a personal digestive tracker to help those struggling with digestive problems such as abdominal pain, bloating, constipation and diarrhoea.

Aire uses an array of sensors to monitor levels of biomarkers on the breath to indicate how well food has been absorbed in the gut. An accompanying mobile app gives users a searchable list of foods that allow users to find out how well they will likely be digested based on the breath readings.

Currently, testing for digestive problems are typically conducted on bulky machines in hospitals. Mr Shortt said FoodMarble is the first company to come up with an easy-to-use, cost-effective way for people to keep track of their digestive issues without needing a hospital appointment.

An engineer by trade, Mr Shortt got the idea for Aire while looking for a solution to help his girlfriend who has problems with food allergies. She is one of almost a billion people globally who are affected by digestive problems.

FoodMarble has already received more than 5,000 pre-orders for Aire via its website. The devices, which are available for an initial cost of €129, are to go on sale shortly.

FoodMarble’s funding round has yet to close and he said he expects the company to raise “a few more hundred thousand” due to the high level of interest from investors.

Mr Shortt said the firm, which currently employs six people, is looking to take on between five and 10 additional employees.

1 How long can Government afford to keep State pension age at 66?
2 Revenue publishes list of companies tapping State for wage support
3 Developers may need to go back to the drawing board as one-beds fall from favour
4 Cosgrave Property Group secures exit from Nama
5 Covid-19 will have a significantly worse impact on UK public finances than on ours
Real news has value SUBSCRIBE