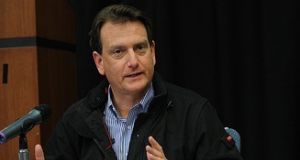 If the US Federal Trade Commission had enforced findings it made in 2011 against Facebook, we might not have had the Cambridge Analytica scandal or Brexit, and the election of Donald Trump might not have happened, privacy advocate Marc Rotenberg said in Dublin.

Mr Rotenberg said on Thursday that in seven years, the US authority had not found “a single infraction” by Facebook against a consent order it issued in 2011.

He said that for this reason he actually had “a certain amount of sympathy” for the social media company following from the controversies in recent years.

He also said the Republic has the potential to be a critical “influencer” in the behaviours and approaches taken by global social media companies, particularly in areas concerning privacy and hate speech.

“As home to the European headquarters of the world’s biggest social media corporations, Ireland now has a critical responsibility to safeguard fundamental rights in the digital age. Enforcement under the GDPR and new laws to address the challenges of fake news and hate crimes in cyber space should be top priorities for the Irish Government,” Mr Rotenberg said.

As president of Epic, Mr Rotenberg advocates on privacy and transparency through the US federal courts; pursues open-government cases; defends consumer privacy, and appears before Congress and judicial organisations.

In 2016, the High Court appointed Epic to act as a “friend of the court” (amicus curiae) in the case of Data Protection Commissioner v Facebook Ireland & Schrems to give a counterbalancing perspective to that of the US government in the litigation involving Austrian privacy campaigner, Max Schrems.

Flac continues to represent Epic in the case as part of its strategic litigation work.

“It’s easy to criticise Facebook for their business practices and their disregard for the rights of internet users. However, the real responsibility lies with those who have the authority to regulate internet companies and protect basic rights. We must expect more of those who are responsible for safeguarding the public interest,” Mr Rotenberg said.

“Ireland’s role as a key regulator of the internet giants is being watched worldwide, particularly by organisations that advocate for human rights and privacy. This is a big responsibility for any country, but a responsibility that cannot be shirked.”

In his lecture, Mr Rotenberg’s also addressed some of the work being undertaken by Epic, a non-partisan organisation, in the US.

This included two freedom of information cases taken against the Internal Revenue Service, to obtain the tax returns of Donald Trump when he was a candidate for the presidency.

Mr Rotenberg noted Mr Trump was the “first candidate for the US presidency in 40 years who chose to withhold his tax returns even though he said repeatedly during the campaign that he would make them available”.

He said he was “optimistic” that that information would be made available “in the next year, perhaps”.

He said Epic was not taking “a political or a partisan view”.

“This is a view about the integrity of democratic institutions and the accountability of those who stand for public office,” he added.

Flac chief executive Eilis Barry said there was “an inequality in the legal capacity of an individual, or NGO, to challenge the law, compared with the resources potentially available to social media operators or the State”.

“A reform of our courts system is needed to enable greater legal advocacy and litigation on public interest issues, not only in relation to the digital space. Such reform should include an expansion of the provision of legal aid, changes in court rules and procedures in relation to multiparty actions, protective cost orders and the rules on standing and also the role of amicus curiae,” she said.

“The objective of regulation should be one which makes the online space one that is civil, safe and democratic. In framing regulation, there has to be a commitment to the principles of transparency, accountability and the protection of representative democracy in the online space. Any regulation introduced also needs to tackle the rise of online hate speech which is widespread against groups such as Travellers and asylum seekers.”

“In Ireland, these principles need to go beyond the revenues and returns to our economy from the social media organisations who have a presence here. Above all, in delivering effective regulation, regardless of who the regulator will be, it needs to be effectively resourced to ensure effective monitoring and effective remedies,” she added.

Flac said its decision to dedicate the 12th annual Dave Ellis Lecture to privacy and access to justice in an online context was based on the organisation’s “increasing concern over the increased threats Ireland’s unregulated digital space presents in terms of fundamental rights”.

Thursday’s lecture took place in the Pillar Room of the Rotunda Hospital.