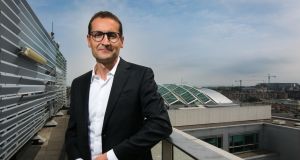 With much of the Republic still unable to get decent broadband, Vodafone is undertaking a new trial to establish if it can successfully operate a dedicated rural wireless network using 5G technology.

The company is to undertake the trial at four locations: – in Roscommon; Gorey, Co Wexford; Clonmel, Co Tipperary; and Dungarvan, Co Waterford – over the coming weeks to determine if customers could get online via a dedicated wireless broadband connection.

The chosen sites, which cover more than 20,000 premises, are to be used to trial equipment that could provide wireless internet access over Vodafone’s recently acquired 3.6HZ spectrum band.

The network, which will be used solely to handle traffic from fixed wireless customers, could potentially allow users to receive peak download speeds of up to 500Mbps at present, increasing to gigabit speeds in the future.

Vodafone’s interim chief technology officer Max Gasparroni said the trial would allow the company to look at how it can enhance and extend broadband access to customers in the most rural parts of the country.

The company, which last month launched the State’s first live 5G network site, has stressed that, while the technology is complementary to rural broadband, it should not be seen as a replacement for fibre.

5G technology brings faster mobile speeds than existing mobile technology networks, as well as lower latency and increased security and reliability. It also enables multiple devices to be connected in a move that is expected to lead to a sharp rise in the number of internet of things devices in circulation

Vodafone said earlier this year that it expects to roll out 5G throughout the Republic within two years.

1 ‘Saudi Arabia is where the opportunities will happen in future’
2 MSD buys Takeda biologics plant in Dunboyne
3 How safe is it to go back to the office?
4 Project to identify spare intensive care beds accelerated by pandemic
5 Data centres will force State to choose between climate and investment
Real news has value SUBSCRIBE