Anger and disappointment as Apple leaves the fields of Athenry 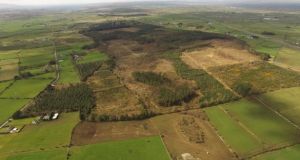 The site of the proposed €850 million Apple data centre at Athenry, Co Galway, which will not now go ahead

The decision by Apple not to proceed with an €850 million data centre in Co Galway is a “blow to the country”, not just the town of Athenry, a local campaign group has said.

Paul Keane of Athenry for Apple said locals would try to keep the message positive but that it would take “huge investment” to properly develop the site the company had flagged for the project.

There was anger and disappointment in Athenry following the announcement about the project, which was forecast to employ 300 people during construction and 150 after completion, but it was not directed at Apple.

Many were surprised the multinational waited more than three years for a “green light” that never arrived for the project.

Cllr Peter Feeney said it was a huge setback for Athenry and highlighted how the Irish planning system was not fit for purpose. However, he praised Galway County Council for granting planning permission within six months.

“No private developer can be expected to wait that long [three years] for a decision – and we still haven’t a decision,” he said. “I’m concerned now for the message it sends to other potential international investors.”

Noel Doherty of Athenry Bring Back Apple (ABBA) said he was “very angry and absolutely devastated” but believes local people did everything in their power to secure the facility, which would have included a new woodland area and a 2km public walkway.

“This would have been the beginning of a hub for Athenry and further afield, 150 jobs might not seem like a lot, but it’s equal to 5,000 jobs in Dublin to us.”

Mr Doherty said his group would, under a different name, continue to engage with the IDA in the hope of attracting other developers to the area.

“We might be down but we’re not out. This could strengthen the community as it’s not the end of the world.”

Mr Keane said the development “should have been fast-tracked in the way it happens in other European countries”.

“It’s a hammer blow for us and while we look forward to a food hub project that will create 350 jobs down the road, it won’t compare to the multi-billion investment of Apple,” he said.

Galway East Independent TD Seán Canney called on the Government to designate Athenry as an area of special investment to counteract the negativity arising from Apple’s difficulties in the town.

Galway West TD Noel Grealish said Apple making an €850 million investment in the area “would have sent out a clear message to other major corporations that Galway is a place to seriously look at in terms of future investment”. He said he hoped the decision “doesn’t have a negative effect” on the county.

Business groups said the decision showed that changes to the State’s planning process were necessary, with IDA chief executive Martin Shanahan saying: “We need a much higher degree of predictability in relation to our planning processes. Not predictability about outcomes, but definitive timelines that are appropriate for the pace at which the commercial world works.”

The Construction Industry Federation (CIF) said: “Inefficiencies in our planning system have resulted in many disasters in the past, but today it has resulted in the loss of the largest investment in the history of the State.”

Its director general Tom Parlon said the “negative ramifications of this system are far greater than the loss of €850 million. Ireland’s designation as a location for foreign direct investment has been irreparably damaged.”

Ibec’s head of infrastructure Dr Neil Walker said while the Republic has set out its stall as a globalised economy that is open for business, the Athenry case demonstrates that our planning system does not support this vision.

1 Chris Johns: Boohoo exposed on pay and conditions in digital economy
2 In this strangest of recessions, what happens next for Ireland?
3 Michael O’Leary is the boss you want to lead an airline out of crisis
4 Should I switch bank now with Ulster Bank at risk of closing?
5 Hotel bookings collapse in wake of additional Covid restrictions
Real news has value SUBSCRIBE