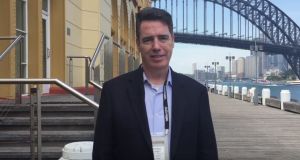 Tintri founder Kieran Harty: says a strength of being Irish is the willingness to go abroad and gain broader experience. Photograph: YouTube

A summer spent in the US on a J-1 visa, working for a software start-up, was all the inspiration Kieran Harty needed to pursue a PhD at Stanford University.

It kick-started a career that has seen Harty become the founder and chief technology officer of his own start-up, Tintri, which provides the software and hardware for companies to store data.

“Our hardware and software keeps data safe,” says Harty, who lives in San Francisco. “It’s reliable, and at the same time it has to be easy to use. It’s not something you see every day, but it is something you use every day.”

Harty attended Terenure College in Dublin and later studied engineering and, subsequently, a masters in computer science at Trinity College.

After his third year in Trinity, Harty went to California on a J-1 with $400 or $500. He landed a job with now-defunct start-up software company, Visicorp, which sparked an interest that would draw him back to the US in 1986.

“The interesting thing is that quite a few of the people that were there, even though that company didn’t succeed, have gone on to be successful at other companies,” he says. “One of the guys who was there became the first vice-president of engineering at Amazon, and somebody else developed PowerPoint.

“It is an amazing environment here, and people go from company to company. They may have success and they may have failure, but it was the quality of people I encountered that really encouraged me to come back here.”

Win some, lose some

After completing his PhD in electrical engineering at Stanford, Harty worked for Tibco for four years before making a move to Visigenic, another one that did not succeed.

“You learn from unsuccessful things as well,” he reckons. “I think if you’re always successful at something, you think you’re golden in terms of what you do, but that’s not the case.”

The next step was to move to VMware, which employed about 25 people when Harty joined in 1999 through a connection with one of the founders, who was on his thesis committee at Stanford.

When he left, Harty was executive vice-president of research and development. Today VMware is worth “20 or 30 billion dollars”, he says.

“I enjoyed being at VMware, but my goal was always to start my own company. I decided at one point: ‘I’ve been here seven years. I’m not going to stay here any longer.’”

The idea that eventually surfaced in 2008 would become Tintri, a name derived from the Irish word “tintreach”, meaning lightning.

While Harty has never worked in Ireland, he says he still feels a strong connection to the country.

“I think the reason we have [staff] in Ireland is that they’re very good people,” he says. “It’s obviously a much smaller place than the US or some countries in Europe, but there’s a very strong talent pool and they’re not afraid to take risks and join a smaller company.”

The next step is to continue growing in the US and, internationally, to become the next big technology company. Currently, Tintri’s customer base includes five of the top 15 companies in the Fortune 100.

“It’s always very competitive in technology,” Harty says, “but we’ve been very successful so far, and we expect to be a very sizable company over the next few years.”

There is now more opportunity and change in that area than ever before for fresh ideas, he adds. “Areas like machine learning and what’s happening on the cloud. Then you have biotech as well, where there’s a lot happening. I think it’s actually more interesting now than it used to be.”

Harty says a strength of being Irish is the willingness to go abroad and gain broader experience.

“Unlike years ago, where going abroad was a big deal, the contact is so easy right now. Even if there’s economics pushing you to do it, it’s a good thing to do.”

In the technology sector, Harty says, you have to put yourself out there to benefit from opportunity and change.

“You just have to take a risk and the thing I think is fundamental is that you have to put yourself out there. If you take a risk, you can fail. But you can also succeed.”