It’s good to talk on the telephone, Irish people rediscover in lockdown 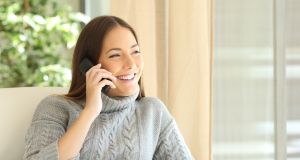 Both landline and mobile voice minutes increased in April-June 2020, as lockdown prompted a comeback for the telephone call. Photograph: iStock

The amount of time Irish people spent talking on the telephone rocketed in the second quarter as restrictions to curb the spread of Covid-19 limited face-to-face contacts and forced people to find other ways to communicate.

While use of video-conferencing apps such as Zoom, FaceTime and Houseparty captured the public imagination, figures from communications regulator ComReg confirm that an old favourite – the humble phone call – also played a key role in keeping friends, family and colleagues in touch.

Total voice traffic minutes increased 12.6 per cent compared with the first three months of 2020 and were 19 per cent higher than in the second quarter of 2019, ComReg said.

Collectively, people spent more than 4.4 billion minutes on the telephone in the April-June period. Mobile voice minutes, which represent the majority (84 per cent) of the total, and landline voice minutes increased at similar rates, the figures show.

The first quarter of 2020, when the Covid-19 crisis began, also saw annual growth in total voice minutes, albeit at the more modest rate of 6.1 per cent. But before this, the amount of time Irish people were spending on both mobile and landline telephone calls was falling.

In the case of landline minutes, the decline was pronounced and long-term. Between the last three months of 2018 and final quarter of 2019 alone, fixed voice traffic fell 20 per cent, while total voice minutes, including mobile calls, fell 6.7 per cent year-on-year in this timeframe.

The ComReg report also found that fixed residential broadband subscribers used an average of 326.7 GB of data per month, a 74 per cent increase compared with the second quarter of 2019 as remote working became the norm and people stuck at home turned to streaming services for entertainment.

Mobile subscribers’ use of data, meanwhile, averaged 9.2 GB per month, up 34 per cent year-on-year. But with users increasingly favouring WhatsApp for written messages, the average number of texts sent by mobile subscribers fell to 42 per month, a 33 per cent annual decrease.