Former head of EMEA for Dropbox, has also worked at Google and Microsoft 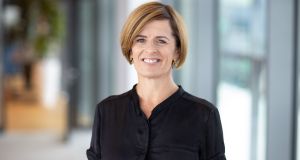 Fast-growing mobile bank N26, which has more than 100,000 Irish customers, has appointed Irishwoman Adrienne Gormley as its chief operating officer.

She joins the company from Dropbox, where she served as vice president of global consumer customer and head of Europe, the Middle East and Africa (EMEA).

Prior to joining Dropbox, Ms Gormley, who is on the board of the American Chamber of Commerce, spent seven years working at Google where her roles included serving as advertising head for the Nordics. Other employers include Creative Labs and Microsoft.

“I’m thrilled to be joining N26 at a time full of opportunity. With more people turning to digital banking than ever before, I believe that we can be the first to pioneer a truly world-class, fully-digital service experience in banking that can set the standard for the future of this industry,” Ms Gormley said.

She is one of two key senior appointments announced by N26, with former Adidas executive Diana Styles also joining as chief people officer.

“Both Diana and Adrienne are accomplished leaders, with proven track records in their respective fields and a true belief in the N26 vision to transform banking for the better,” said Maximilian Tayenthal, chief financial officer and co-founder of N26.

The appointments come as Sarunas Legeckas, who formerly served as head of Ireland for N26 and then as general manager for greater Europe, confirmed he had left the company to return to Lithuania to take up a role with ConnectPay.

N26 earlier this month announced that Georg Hauer, its general manager for the bank’s home markets of Germany, Austria and Switzerland, was becoming its new head for Ireland. The bank said this was in recognition of the importance of the Republic as its only English-speaking market.

Founded by Mr Tayenthal and Valentin Stalf in February 2013, the Berlin-headquartered bank now has five million customers globally. It launched services in Ireland in December 2015. The bank has raised close to $800 million to date and it employs more than 1,500 people.

1 Hurrah for the companies giving staff more time off
2 RTÉ to seek 70 voluntary redundancies as ‘large costs’ beckon in 2021
3 ‘We lost money on our planned wedding in Spain. Covid saw to that’
4 Some Irish money market funds came close to danger in March
5 Covid-19 will worsen shortage of accountants, says CPA Ireland
Real news has value SUBSCRIBE