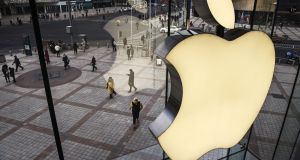 A Dublin company backed by US-Irish investors has launched a wave of US lawsuits against major technology companies including Apple, Dell and the music streaming service Spotify.

Data Scape, which operates from offices in Sandyford, owns a suite of US technology patents acquired in recent years from companies such as Sony. Among them are patents for technology to assist in data transfer and cloud storage.

The Irish company has accused the various tech giants of violating these data patents in eight separate lawsuits filed in Texas and California in the days immediately following Christmas.

The Apple lawsuit, for example, alleges the behemoth infringes several of Data Scape’s data technology patents in the operation of iTunes, its music service, and iCloud, its storage system that allows users shift files between devices.

In separate cases where it makes broadly similar allegations, Data Scape has also filed legal cases against German giant SAP, which offers cloud storage services; Japanese group Fujitsu, with a complaint over how data is transferred to the cloud from its devices; Dell and its EMC data subsidiary; Nasdaq-listed Western Digital, over its My Cloud service; Citrix, over its ShareFile system; and music streaming services Pandora Media and Spotify.

None of the respondents have yet filed a formal legal defence, but is appears likely that the cases will be contested. Data Scape has not indicated how much in damages it will seek, if any of the cases are successful or even get to trial.

Data Scape is a non-trading company that appears to have been set up in Dublin in 2017 purely to hold intellectual property such as patents.

The Government has tweaked Irish legal rules and the tax system several times in recent years to make the State a more attractive location for tech companies to locate their intellectual property here.

Data Scape operates from the same Sandyford address as Solas Oled, another technology intellectual property company with which it shares some directors and investors. Solas is not a party to any of the legal actions, however.

Data Scape is 49 per cent owned by an Irish company linked to giant US hedge fund Magnetar Capital, which has about $13 billion of assets under management. The remaining shares are split equally between three US tech investors with strong Irish links – Stephen McErlain, Gerald Padian and Richard Tashjian, who reportedly all know each other from their days at Fordham University.

According to the website for Solas, Mr Padian, whose nationality is listed as Irish on company documents, founded US tech company Realtime Data, to which the other investors also have links. The Solas profile says Mr Padian now focuses on his investments in Ireland.

Data Scape’s board also includes two Irish-based directors, who both also work at Solas as managing directors: Dublin-based accountant Sean O’Sullivan and Ciaran O’Gara, who appears to have an executive role and formerly worked for Wayfair. Mr O’Gara was unavailable for comment prior to publication.