Irish-based ChangeX teams up with UN for sustainability projects 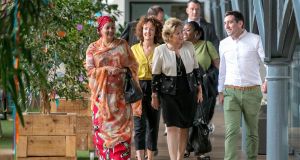 Irish-headquartered social entrepreneurship platform ChangeX has teamed up with the United Nations to create millions of projects in line with the organisation’s sustainability development goals.

The company, which is backed by a number of high-profile investors, is looking to mobilise 20 million new projects around the UN’s goals for 2015 to 2030.

“We are hopeful we can create a grassroots movement towards achieving the goals,” ChangeX founder and CEO Paul O’Hara said.

The commitment has got the backing of UN deputy secretary-general Amina Mohammed, who visited ChangeX in Dublin, expressing her support for the for the commitment.

“We must do much more at all levels everywhere, to protect our planet and ensure prosperity for all. Governments, businesses and civil society have a collective responsibility to achieve the the SDGs by 2030,” Ms Mohammed said. “We urgently need organisations like ChangeX to mobilise all stakeholders using innovation for impact in the lives of all people.”

ChangeX offers an “impact as a service” model to track philanthropic investments in real time, intended to create more transparency for those funding investment projects.

ChangeX is hoping to galvanise Irish companies into supporting projects that work towards supporting the UN goals.

An increasing number of companies are paying closer attention to CSR. But while it can be beneficial if it is done properly, companies that view their commitment as a “box ticking exercise” risk damaging their reputation.

“A lot of Irish companies are superficially doing CSR. If it’s not damaging them directly, it soon will,” said Mr O’Hara. “The expectations of employees and consumers are much higher. It’s challenging for companies to do it in a meaningful way.”

Mr O’Hara said the previous goals, the millennium goals, had about 30 per cent awareness in Ireland, but engagement rates were much lower as they were aimed more at developing countries.

“We want to tap into latent energy, into the community, and harness it alongside company resources.”