Ireland near bottom of EU for broadband speeds 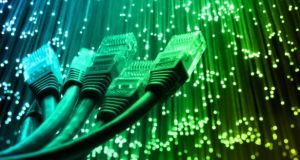 Ireland came in 36th place globally in the rankings of broadband speeds out of 200 locations.

Ireland lags behind many of its European counterparts when it comes to broadband speeds, according to a new ranking which places the country in the bottom third of EU member states.

Overall, the State comes in 36th place globally in the rankings out of 200 locations, unchanged from a year earlier.

However, while Europe accounts for nine out of of the top 10 countries for broadband speeds worldwide, Ireland languishes in 30th spot out of 52 European locations. It is also ranked close to bottom among EU member states, placing above only Croatia, Italy, Malta, Greece and Cyprus.

The study, which covers more than 163 million speed tests across 200 countries, was conducted by M-Lab, a partnership between New America’s Open Technology Institute, Google Open Source Research, Princeton University’s PlanetLab and other supporting partners, and compiled by Cable.

“Ireland remains in the top quarter of countries in the world, with average speeds far exceeding the 10 megabits per second [mbps] deemed the minimum for a modern household,” said Don Howdle, consumer telecoms analyst at Cable.

“The fact that it has neither risen nor dropped down the worldwide league table tells us that, at the very least, Ireland is keeping pace with the rest of the world, unlike the UK, for example, which slipped four places this year,” he added.

Singapore ranks as the world’s fastest country in the world for the second year running with average speeds of 60.39mbps. Yemen is last again at an average speed of just 0.31mbps.

The study reveals that the average global broadband speed has jumped 23 per cent in the 12 months to the end of May, increasing from 7.40mbps to 9.10mbps. But there are substantial differences globally with the five fastest countries having download speeds around 88 times faster than the five slowest.

While Ireland’s ranking didn’t improve, average broadband speeds did. This, however, is largely as a result of providers offering ever-faster services in urban centres while those in rural areas plod on with slow and patchy access.

Overall, Ireland’s average broadband speed increased by nearly 31 per cent over the last year, from 13.92mbps to 18.22mbps.

The study shows it takes an average of 37 minutes, 28 seconds to download a typical 5Gb high-definition movie in Ireland, compared with just 11 minutes, 18 seconds in Singapore.

Although commercial broadband services in cities and other urban centres have improved in recent years, the Government’s plan to address poor-quality services in rural areas has been delayed due to the complexity of the procurement process, which now has only one bidder.

Work on the State-subsidised National Broadband Plan was to have started at the beginning of 2018 but this has now been put back to next year.