Hashtag is used by Twitter users more than 17,000 times per day on average 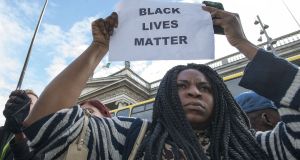 The #BlackLivesMatter hashtag first appeared on Twitter in July 2013 following the acquittal of George Zimmerman in the shooting death of Trayvon Martin.

A study from the respected Pew Research Center in Washington DC, shows the hashtag has been used more than 17,000 times per day on average since its inception in July 2013.

Not surprisingly, use of the hashtag tends to spike around events where race, law enforcement and fatal shootings are prevalent.

The #BlackLivesMatter hashtag first appeared on Twitter in July 2013 following the acquittal of George Zimmerman in the shooting death of Trayvon Martin.

Over the 10 days spanning July 7th to 17 2016 for example, when Alton Sterling and Philando Castile were shot dead by police officers and when police officers, themselves, were killed in Dallas, Texas and Baton Rouge, Louisiana, the hashtag was used in 500,000 tweets a day during that period.

Pew’s study found that the related #BlueLivesMatter and #AllLivesMatter were also among the most popular political hashtags used over the last five years.

The research also covered the use of a broader collection of hashtags related to political or social issues, including #MeToo, #JeSuisCharlie, #MAGA, #LoveWins and #Resist.

It found that #MAGA (Make America Great Again), the slogan made popular by US president Donald Trump during his presidential campaign, has been used on average 205,238 times per day since US Election Day 2016 and May 1st, 2018.

While the “Me Too” movement was founded in 2006, the #MeToo hashtag didn’t rise to prominence until 2017 when the revelations of alleged sexual harassment and assault by Hollywood producer Harvey Weinstein became well known. The hashtag has since appeared an average of 61,911 times per day on Twitter.

Meanwhile, on the day of the US Supreme Court’s decision on same-sex marriage, #LoveWins was used seven million times. The hashtag was used a further three million times the following day.

The #JeSuisCharlie hashtag which commemorated the January 7th, 2015, Charlie Hebdo shooting in France, which was non-existent prior to the attack, was used roughly 2 million times in the 48 hours after the attack but is now rarely used.

In addition to analysing Twitter hashtags, Pew also conducted a survey on Americans’ views and experiences with political engagement on social media. According to the survey, 65 per cent of those surveyed agreed that social media highlighted important issues that might not otherwise get a lot of attention.