Report ranks Ireland among world’s most expensive countries for broadband 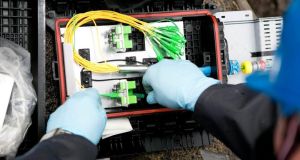 According to the research, the Republic comes in 116th place overall with an average broadband package price of €56.92 a month.

The Republic is at least five years out of step with the UK for broadband provision and more than a decade behind other European countries that have invested heavily in fibre-to-the-home technology.

That is according to the authors of a new report, which ranks Ireland among the most expensive countries in the world for broadband.

According to the research, which was compiled using data from 3,303 fixed-line broadband deals in 195 countries, the Republic comes in 116th place overall with an average broadband package price of €56.92 a month.

Of the 29 Western European countries measured, Ireland is the ninth most expensive with the report authors saying the low ranking was due in part to a failure to roll out broadband nationwide.

“Ireland finds itself some way behind many other European nations from an infrastructural point of view,” said Dan Howell, consumer telecoms analyst at Cable.co.uk, a comparison website that carried out the study in association with research consultancy BVA BDRC.

He said a previous stated aim from the Government to ensure 90 per cent of homes and premises would have access to high-speed broadband by 2020 was at least five years behind the UK, where it is already available to 96 per cent of the population. He added it was even further behind countries that have invested heavily in fibre-to-the-home such as Spain, Sweden and Latvia.”

While the Government had hoped to have the vast majority of homes in the State connected by 2020, this is now in serious doubt given concerns over whether the National Broadband Plan will proceed.

“It is the need for greater investment to update ageing infrastructure that drives prices higher in Ireland than elsewhere in Europe. Countries where the latest fibre-to-the-home solutions are widely available offer some of the cheapest broadband out there,” said Mr Howell.

‘I have a talent for justifying purchases’ 05:20
Irish whiskey sales near milestone of 12m cases a year 05:00
Military-style planning can help businesses battle Covid-19 survival threat 04:49
People ‘overloaded’ by social media more likely to believe false stories 00:01
Should my mam wait for house prices to drop before buying? 20:07

1 Chris Johns: Past is another country when it comes to our post-pandemic future
2 Should my mam wait for house prices to drop before buying?
3 ‘I’m so lucky to be in the Caribbean – a million miles from Derry Girls’
4 US ‘hard seltzer’ drink White Claw launches in Ireland
5 Michael Smurfit: ‘I asked Trump to invite me to the White House for my 80th birthday’
Real news has value SUBSCRIBE